Update Required To play the media you will need to either update your browser to a recent version or update your Flash plugin.
By Jonathan Evans
20 July, 2019


Artists are often leaders of social change. They use their work to speak on difficult political and cultural issues. Activist painters, filmmakers and musicians may be the most well-known. But dance teachers have also dealt with social issues with their dance companies.

In South Africa, protecting the environment and cultural heritage are at the center of the yearly Ballet in the Bush show. 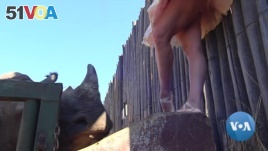 Ballet and Rhinos in the African Bush

Every year, dancers from South Africa and around the world perform for young rhinos in Limpopo Province. The dancers in the Ballet in the Bush performance demonstrate their skill and educate the public about rhino poaching.

Cuban-American Adiarys Almeida was one of the first dancers to take part in the project in 2014.

"I was scared at first, but then it was fine. It was actually amazing to have them so close...I mean, I came back for the experience, but also for the good cause of like, saving the rhinos. And I think it's just fantastic."

One goal of the project is to support ballet in Limpopo with the help of well-known teachers and dancers. Another is to raise general interest about rhinos and support for their protection, especially from poachers.

About 200 people watched this year's Ballet in the Bush performance. The project raises an average of $1,400 every year.

About 50 local children join the professionals for workshops and performances. This year, Limpopo dance student Fran Makamola was one of them.

"I enjoyed the show the most. I learned a lot of new things. And I also enjoyed watching the rhinos and learning about the rhinos, and that they are very special animals, and we should care for them more."

Dirk Badenhorst is the organizer and leader of the South African International Ballet Competition. He notes that ballet dancers based in the U.S. have also been part of the program.

"It shows that there is this working together and willing and wantingness to help achieve in South Africa what they have achieved in the United States of America."

Arrie van Deventer is the creator and director of the Now Or Never African Wildlife Trust. He says that rhinos are at the refuge in Limpopo because poachers killed their mothers.

"They are facing definite extinction if this carries on. So, the more people that hear this message, that hear the plight of the rhino, the better."

Officials say there has been a decrease in the number of reported poaching cases in South Africa. But a decrease in poaching numbers does not yet mean the end of rhino poaching. Officials welcome all efforts to help save the rhino population.

achieve – v. to get or reach something by working hard

scared – adj. afraid of something; nervous or frightened