Update Required To play the media you will need to either update your browser to a recent version or update your Flash plugin.
By Ashley Thompson
26 May, 2018


Speeches have long been an important tradition at college and university graduation ceremonies in the United States.

Every spring, schools honor students who have successfully completed their study programs. As part of the ceremonies, the schools often invite well-known and well-respected people to speak about their own life experiences and offer advice to the new graduates.

Leaders in the arts, business and politics are among those who are asked to speak. What they say sometimes gains national attention; their speeches often examine the problems and issues the world is facing.

This spring's graduation speakers were no different. 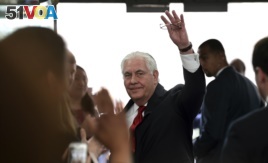 FILE - Outgoing Secretary of State Rex Tillerson waves goodbye as he walks out of the doors of the State Department in Washington, March 22, 2018, after speaking to employees upon his departure.

Former U.S. Secretary of State Rex Tillerson spoke at the graduation ceremony for the Virginia Military Institute in Lexington City, Virginia. He asked graduates to be thankful for all the people who helped them get to this point, including parents and teachers. He also discussed how technology helps today's college students do much more than when he was in college.

Comparing today's graduates to those of years past and reminding graduates to be thankful are commonly heard subjects in commencement speeches.

Yet Tillerson's speech also included comments on how important truth is to democracy.

Tillerson said, "It is only by a fierce defense of the truth and a common set of facts that we create the conditions for a democratic free society."

He continued, "If our leaders seek to conceal the truth or we as people become accepting of alternative realities that are no longer grounded in facts, then we as American citizens are on a pathway to relinquishing our freedom."

Some news reports took those comments as a criticism of President Donald Trump. Tillerson did not mention the president by name. But phrases like "alternative facts" and "fake news" are terms that Trump and his representatives sometimes use when news organizations are critical of him.

Trump dismissed Tillerson from his position as secretary of state in March.

In a graduation speech in Los Angeles at the University of Southern California, television star Oprah Winfrey also discussed problems caused by the spread of misinformation. She spoke during the ceremony of the school's Annenberg School for Communication.

She called truth "our saving grace."

"Not only are you here, USC Annenberg, to tell it, write it, to proclaim it, to speak it, but to be it. Be the truth," she said

The school has recently had its own problems. It faced a scandal and student demonstrations after school officials were caught misusing money meant for student aid earlier this year. Boseman spoke about the scandal and the deeper problems facing students -- especially as African Americans.

"Many of you will leave Howard and enter systems and institutions that have a history of discrimination and marginalization," he said.

But both Boseman and Winfrey also offered hope. Boseman suggested that the problems they will have to face will only make them better people in the end.

"I don't know what your future is," Boseman said. "But if you're willing to take the harder way ... the one with more failures at first than successes . . . then you will not regret it. ... Remember the struggles along the way are only meant to shape you for your purpose."

Winfrey offered clear advice for the USC graduates. She noted the power they can have simply by voting. If they feel their leaders are not doing what they want them to, they should vote those leaders out of office, she told them.

Winfrey also argued that for almost any problem, young people could find a solution. All they need to do is act.

"Pick a problem, any problem, and do something about it," she said. "Because to somebody who's hurting, something is everything."

Christine Lagarde is managing director of the International Monetary Fund. She gave the graduation speech at Claremont McKenna College in Claremont, California. She asked graduates to look into their future to consider what effects their next choices and actions may have.

Lagarde also asked the graduates to think about how different the world is now compared to 10 years ago, and how different it may be in 10 more years. And she asked them how they planned on making sure the world goes in the direction they want it to.

"What kind of country, what kind of world, will you help build?" she asked. "What values will you respect? What will drive your life and the lives of others? Ten years from now, when the class of 2028 stands here and prepares to graduate, what will you have done to help them?"

However, not all the graduation speeches of 2018 had such a serious tone. Many speakers aim to use humor to build a connection with the graduates and make the ceremonies more enjoyable.

Actor and director Michael Keaton did just that in the final part of his speech at the school he attended: Kent State University in Kent, Ohio.

"I've got two words that I want you all to remember ... I'm Batman," he said. Keaton played the popular character in two Hollywood films.

Pete Musto reported this story for VOA Learning English. Ashley Thompson was the editor. We want to hear from you. What are some of your favorite graduation speeches that you have read or listened to? Write to us in the Comments Section or on 51VOA.COM.

graduation – n. a ceremony at which a document which shows that a person has finished a course of study are given out

commencement – n. a ceremony at which a document which shows that a person has finished a course of study are given out

conceal – v. to keep something secret

alternative – adj. existing or functioning outside of the established society

relinquish(ing) – v. to give up something

mention – v. to talk about, write about, or refer to something or someone, especially in a brief way

phrase(s) – n. a group of two or more words that express a single idea but do not usually form a complete sentence

saving grace – idm. a good quality that makes a bad or unpleasant person or thing better or more acceptable

marginalization – n. the act of putting or keeping someone in a powerless or unimportant position within a society or group