Update Required To play the media you will need to either update your browser to a recent version or update your Flash plugin.
By Hai Do
11 August 2020

Biden's choice signals the importance of the Black vote in the upcoming presidential election against President Donald Trump.

Biden wrote on the social media website Twitter: "I have the great honor to announce that I've picked @KamalaHarris — a fearless fighter for the little guy, and one of the country's finest public servants — as my running mate."

Who is Kamala Harris?

Harris is a 55-year-old first-term senator from the state of California. She was born in Oakland to a Jamaican father and Indian mother.

Harris won her first election in 2003 when she became San Francisco's district attorney. As the city's top lawyer, she created programs to help low-level drug offenders and keep students in school. She was elected California's attorney general in 2010. She was the first woman and Black person to hold that job.

After being elected to the U.S. Senate in 2016, she gained attention for her forceful questioning of Trump administration officials during congressional hearings.

Harris launched her presidential campaign in early 2019 in a crowded race for the Democratic Party nomination. Her first campaign appearance brought out 20,000 people. But without enough money to run the campaign, Harris withdrew from the race in December 2019, two months before the first votes in the nominating process.

During a primary debate, Harris attacked Biden for his opposition to busing in the 1970s as schools began to bring Black and white students together.

"There was a little girl in California who was a part of the second class to integrate her public schools, and she was bused to school every day," she said. "And that little girl was me."

Biden said her comment misrepresented his position. But the two have since returned to a warm relationship.

"Joe has empathy, he has a proven track record of leadership and more than ever before we need a president of the United States who understands who the people are, sees them where they are, and has a genuine desire to help and knows how to fight to get us where we need to be," Harris said at an event for Biden earlier this summer. 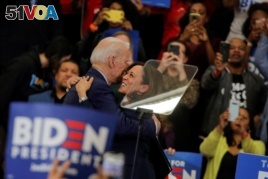 Why is the vice president selection important?

Harris joins Biden in the 2020 presidential campaign as the nation faces many problems.

The coronavirus pandemic has claimed the lives of more than 160,000 people in the U.S. COVID-19 linked business closings have hurt the economy. At the same time, protests against racism and the police after the death of George Floyd have taken place across the country.

The choice of vice president also carries increased importance for the Democratic Party this year.

If elected, Biden would be 78 years old at the time of taking office in January. He would be the oldest man to ever become president. Biden has not said whether he will seek a second term in 2024. Biden's running mate would then likely become the leading Democratic Party candidate for the presidential nomination that year.

Hai Do adapted this story based on Associated Press and other materials for VOA Learning English. Mario Ritter, Jr. was the editor.

integrate –v. to end a policy that keeps people of different races separate

pandemic –n. a situation in which an infectious disease spreads quickly over a large area of the world