Billionaire Race: Branson Set to Be First to Visit Space

Update Required To play the media you will need to either update your browser to a recent version or update your Flash plugin.
By Bryan Lynn
10 July 2021


British billionaire Richard Branson is set to launch into space on Sunday on a rocket plane built by the space tourism company he created.

The 70-year-old Branson will join two pilots and three other "mission specialists" on the flight. Virgin Galactic -- the business Branson started in 2004 -- aims to fly private citizens to the edge of space. The trips are designed to permit passengers to experience three to four minutes of weightlessness and observe the curvature of Earth.

Virgin Galactic's experience takes place in a space plane called VSS Unity. A large carrier airplane, called VMS Eve, carries the space plane to 15,000 meters and then releases it. VSS Unity then uses rocket power to fly to the edge of Earth's atmosphere.

The trip will begin and end at Virgin Galactic's Spaceport America complex in the southwestern state of New Mexico. The flight is expected to carry the group to a height of about 89 kilometers. 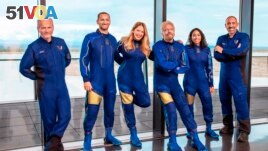 Virgin's mission marks the 22nd test flight of the spacecraft, and fourth crewed trip beyond Earth's atmosphere. But it will be the first to carry a full group of space travelers in addition to pilots.

If successful, Sunday's flight will mean that Branson made it to space before Jeff Bezos -- the creator of rival space tourism company Blue Origin. About a month ago, Bezos announced his plans to be on his company's first human space flight.

Bezos' flight is set to launch on July 20 from the company's launch center in West Texas. He will be joined by his brother, Mark, and two other guests.

Blue Origin's New Shepard rocket launches together with a self-piloted spacecraft that can carry up to six people. The spacecraft separates from the reusable rocket, which is designed to return to Earth and land in an upright position by itself.

Much has been written about a race to space between the two billionaires. Branson had long stated his desire to fly aboard Virgin Galactic's space plane. His latest plans were made public shortly after Bezos made his announcement. However, Branson has said it was not his goal to beat Bezos to space.

"It's honestly not a race," he recently told Reuters news agency. "If it's a race, it's a race to produce wonderful spaceships that can make many more people be able to access space. And I think that's both of our aims."

Bezos has not commented publicly on Branson's upcoming flight.

So far, more than 600 people have reserved seats with Virgin Galactic at a cost of $250,000 each. Blue Origin expects to announce prices and sell trips once Bezos flies.

America's SpaceX, led by Elon Musk, also has a space tourism business, and has sold several seats on private space flights. But SpaceX has said its space tourism program aims to launch people into super high orbit – about 800 to 1,200 kilometers above Earth. The price for those trips is expected to be millions of dollars.

Musk has stated his desire to one day ride into space on a company-built spaceship. He has not said when he might be ready to go.

But Musk recently said on Twitter: "There is a big difference between reaching space and reaching orbit."

The Associated Press and Reuters reported on this story. Bryan Lynn adapted the reports for VOA Learning English. Mario Ritter Jr. was the editor.

curvature – n. the state of being curved or bent

rival – n. someone or something that is competing with another person or thing

reserve – v. to place a request for a product or service ahead of time