Update Required To play the media you will need to either update your browser to a recent version or update your Flash plugin.
By John Russell
19 July, 2019


Iranians are increasingly turning to digital currency, such as Bitcoin, to make money. The situation is creating alarm in and out of the country.

In Iran, some government officials worry that Bitcoin "mining" is abusing Iran's system of government-supported electricity. 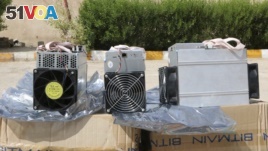 This undated photo provided by the Police News Agency, shows boxes of machinery used in Bitcoin "mining" operations that were confiscated by police in Nazarabad, Iran. (News.police.ir via AP)

In the United States, some observers warn that digital currencies could be used to go around economic restrictions targeting Iran.

Bitcoin is like money, but it is different than the paper money printed by governments around the world. Central banks do not control it. Instead, bitcoin and digital currencies like it trade globally in high-risk markets.

The markets depend on computers around the world to "mine" the data. In other words, the computers use highly complex mathematics to approve exchanges.

But the computers are not only costly; they also require a lot of electricity to work. In Iran, "miners" are in a good position because the government helps pay for electricity. "Miners" in Iran also buy less-costly Chinese ready-made computers.

Those contacted by The Associated Press news agency refused to speak about their work or to say how much they earn from their "mining." But the "miners" admit they do it to make some money at a time when the value of Iran's currency, the rial, has fallen. Since 2015, the rial has dropped from 32,000 rials to $1, to around 120,000 rials to $1 now.

Mohammad Javad Azari Jahromi is Iran's minister for information and communications technology. He says, "The business of ‘mining' is not forbidden in law." However, he notes that the government and Central Bank have banned the import of mining machines until new regulations are introduced.

Ali Bakhshi is the head of the Iran Electrical Industry Syndicate. He said earlier this month that the country's Energy Ministry would likely increase costs for Bitcoin "miners" to 7 cents for each kilowatt of electricity they use. The current price is about a half-cent.

Still, there are concerns, especially among Iran's religious leaders, that people might try to avoid paying extra for the electricity. Using digital currency to hide or move money illegally is another concern.

U.S. officials have also been keeping a close watch on Iranians holding bitcoins. In November, a court in Newark, New Jersey accused two Iranian men of hacking and holding hostage computer systems in order to get payment in bitcoins.

Sigal Mandelker is the U.S. Treasury's undersecretary for terrorism and financial intelligence. Mandelker said Iran is becoming increasingly isolated and desperate for access to U.S. dollars. As a result, she said, digital currency services need to protect themselves against illegal activity.

Jahromi, Iran's minister for information and communications technology, did not seem to think such steps were necessary.

He said digital currencies were effective in getting around economic restrictions for small purchases or exchanges. But, he said, he did not think they could be used for big things.

"We cannot use them to go around" international money systems, he said.

Jon Gambrell and Amir Vahdat reported on this story for the Associated Press. John Russell adapted it story for Learning English. Kelly Jean Kelly was the editor.

syndicate – n. a group of people or businesses that work together

kilowatt – n. a unit of electrical power equal to 1,000 watts

hack – v. computers : to secretly get access to the files on a computer or network in order to get information, cause damage, etc.