Update Required To play the media you will need to either update your browser to a recent version or update your Flash plugin.
By Jill Robbins
11 December, 2017


The future prices of bitcoin increased 18 percent to more than $18,000 on Monday morning on the Chicago Board Options Exchange.

Futures are a type of contract in which a buyer and a seller agree on a price for a particular item to be delivered on a date in the future. Future contracts are available for nearly everything that can be sold such as wheat, soy, gold, oil, cocoa and, now, bitcoin.

The demand for bitcoin futures slowed the trading in the Chicago exchange. At times, trading on the site was not available. 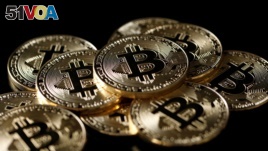 A collection of Bitcoin (virtual currency) tokens are displayed in this illustration taken Dec. 8, 2017. (REUTERS/Benoit Tessier/Illustration)

What is a bitcoin, anyway?

Bitcoin is different from other national currencies that are supported by governments and national banks. It is not a coin or printed on paper. It is stored as a line of computer code.

Bitcoin is similar to cash because you can spend it without using your real identity, as you do with a bank transfer or credit card. People who want to buy and sell anonymously like bitcoin.

How is bitcoin created?

Mining is the only way to create new bitcoin.

People "mine" bitcoin by lending computing power to verify other users' transactions. They receive bitcoins in exchange. The coins also can be bought and sold on exchanges with U.S. dollars and other currencies.

This activity is called a blockchain. The blockchain, or global record of how bitcoin is exchanged, prevents anyone from spending the same bitcoin more than one time.

How did bitcoin come to be?

There is still some mystery about the creation of bitcoin in 2009. An anonymous person or group that used the name Satoshi Nakamoto described the idea of an electronic cash system in a research paper in October 2008.

The first bitcoin block was created by Satoshi Nakamoto in January 2009, with a reward of 50 bitcoin.

Who is using bitcoin?

Some businesses, such as Overstock.com, have accepted payments in bitcoin. Still, its popularity is low compared with cash and credit cards. Many individuals and businesses will not accept bitcoins for payments.

Some well-known banking executives have spoken against bitcoin. Jamie Dimon, head of JP Morgan Chase Bank called it a "fraud." But his bank is starting to use the technology behind bitcoin, known as blockchain, to more accurately track trading and assets.

Jill Robbins adapted this story for Learning English based on Associated Press and other news reports. Hai Do was the editor.

futures - n. [always plural] finance. goods or shares that are bought at prices which are agreed to now but that are delivered at a later time

anonymous - adj. not named or identified

verify - v. to prove, show, find out, or state that (something) is true or correct

blockchain – n. a global running record of every bitcoin transaction

transaction - n. an occurrence in which goods, services, or money are passed from one person or account to another

What do you think of the bitcoin market? Do you use bitcoin or another kind of virtual currency? We want to hear from you. Write to us in the Comments Section.