Bitcoin Loses Half of Its Value

Update Required To play the media you will need to either update your browser to a recent version or update your Flash plugin.
By Hai Do
17 January, 2018


The price of Bitcoin dropped below $10,000 on Wednesday.

Bitcoin is the world's best-known cryptocurrency. But, it has lost half of its value from the record price set last month.

The digital currency was valued at over $19,000 last December. On Wednesday, Bloomberg financial service said the price dropped to about $9,600.

Charles Hayter is a founder of Cryptocompare, a business that owns cryptocurrencies. He told Reuters, "There is a lot of panic in the market. People are selling." He said the fall in the value of bitcoin is related to uncertainty about whether governments will try to set rules for its use.

Bitcoin is different from national currencies, which are supported by governments and central banks. Bitcoin is stored as a line of computer code. It is not printed on paper or something you can hold like a coin.

Computers keep a global record of how each bitcoin is exchanged so that ownership and transactions can be confirmed.

Last week, the South Korean government said that it is considering measures to ban trading of cryptocurrencies, including bitcoin. Officials also are expected to debate the rise of bitcoin at the upcoming G20 summit, a meeting of the world's major economic powers, in Argentina in March. 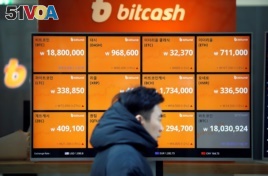 In April, the Japanese government recognized bitcoin as a legal currency for settlement of debts. As Venezuela's national currency loses value, Venezuelans have increasingly turned to bitcoin for daily use. And North Korean computer hackers are believed to be stealing bitcoins from exchanges in South Korea.

Warren Buffett is an influential American investor and one of the richest men in the world. Last week, he warned: "In terms of cryptocurrencies, generally, I can say with almost certainty that they will come to a bad ending."

Some observers say the recent drop in value shows that bitcoin was overpriced. Others welcome government rules and expect the extreme price changes to continue.

The price of bitcoin has dropped before. Marc Singer is an adviser with the investment company Singer Xenos. He noted that bitcoin lost 93 percent of its value in 2011 and half its value in 2015.

Christopher Keshian is with the APEX Token Fund, an investment group. He told Reuters that the sharp change in value "is an expected, and important, part of the journey to becoming" an accepted asset. He expected sharp changes in value to continue and that the price of bitcoin would rise again.

On Wednesday, Reuters reported that experts at Citi, an American financial company, said bitcoin could lose half of its value again, to about $5,000.

Hai Do adapted this story for Learning English based on Reuters and other news reports. Mario Ritter was the editor.

cryptocurrency –n. a form of money that only exists electronically

founder –n. a person who establishes something meant to last for a long time

hacker –n. someone who gains access to digital information or computer systems without permission

code –n. a set of instructions for a computer

asset –n. something of value