Researchers: Many Black Holes in Center of Milky Way Galaxy

Update Required To play the media you will need to either update your browser to a recent version or update your Flash plugin.
By Pete Musto
10 April, 2018


Astronomers say the center of our galaxy has plenty of strange, super gravity objects.

For years, scientists believed that circling the center of galaxies, including our own Milky Way galaxy, were not only stars, but lots of stellar black holes. These are stars that have collapsed, creating gravity so strong even light does not get out.

But scientists had yet to find evidence of black holes at the center of the Milky Way until now. 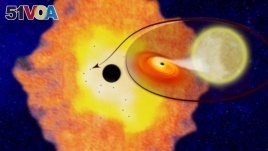 Twelve black hole low-mass binaries orbiting Sgr A* at the center of the Milky Way galaxy, appear in this illustration provided by Columbia University, April 5, 2018.

Astronomers studying old x-ray observations have found signs of at least 12 black holes in the inner circle of the Milky Way. And since most black holes cannot be found that way, they believe that there are likely thousands of them there.

In fact, a study suggests there may be more than 10,000 black holes in the center of our galaxy. The findings appear in the journal Nature.

Chuck Hailey is an astrophysicist at Columbia University in New York. He was the lead writer of the report. He told the Associated Press, "There's lots of action going on there. ... The galactic center is a strange place. That's why people like to study it."

Scientists already know about a supermassive black hole at the center of the Milky Way. They call it Sagittarius A.

Supermassive black holes are the largest kind of black hole, being between a million and billion times bigger than others. This latest research shows that the newly discovered stellar black holes are in addition to Sagittarius A and they do, in fact, circle it.

The newly discovered black holes are within about 31 trillion kilometers from the supermassive black hole at the center of the Milky Way. So there is still a lot of empty space and gas among all those black holes. But Hailey noted that if you looked at the amount of space around Earth, there would be zero black holes, not thousands.

Our planet is part of a spiral arm circling the Milky Way. It is about 9.5 trillion kilometers, or 3,000 light years, from its center. In the rest of our galaxy, scientists have only identified about 60 black holes to date, Hailey added.

Harvard astrophysicist Avi Loeb was not part of the latest study. He called the findings exciting, but noted that they confirmed what scientists had long expected.

The newly confirmed black holes are about 10 times the mass of our sun. In comparison, Sagittarius A has the mass of 4 million suns.

Binary black hole systems are likely only five percent of all black holes, he added. So that means there are really thousands of them.

Hailey said there are good reasons the Milky Way's black holes are usually in the center of the galaxy. First, their mass most often pulls them to the center. But mostly the middle of all those stars is the perfect place for black hole formation, with lots of dust and gas.

He said it is "sort of like a little farm where you have all the right conditions to produce and hold on to a large number of black holes."

Seth Borenstein reported this story for the Associated Press. Pete Musto adapted his report for VOA Learning English. George Grow was the editor.

We want to hear from you. What else do you think scientists will find at the center of our galaxy? How many more black holes do you think are out there? Write to us in the Comments Section or on 51VOA.COM.

stellar – adj. of or relating to the stars

x-ray – n. powerful invisible rays that can pass through various objects and that make it possible to see inside things, such as the human body

spiral – n. a circular curving line that goes around a central point while getting closer to or farther away from it