Update Required To play the media you will need to either update your browser to a recent version or update your Flash plugin.
By Phil Dierking
17 March, 2017

The Associated Press says traffic was slowed partly because of a partial transport strike that began Tuesday night. Later in the day, teachers, union members, and activists went into the streets of Sao Paulo to protest the proposed changes. 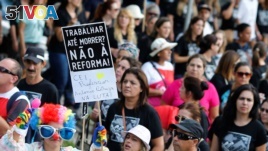 Demonstrators protest during a strike against Brazilian Social Welfare reform project, in Curitiba, Brazil March 15, 2017. The placard reads: "Work until die? No to reform."

In Brasilia, the capital, over 1,500 hundred protesters broke into the Finance Ministry's offices and occupied it for several hours.

The demonstrators were protesting Brazilian President Michel Temer's plan to change labor rules and the social security pension system. Critics are saying his plan would reduce job security for workers. They also say it would force many people to work longer to meet requirements for a pension. It would also reduce government aid for many retirees.

The changes would give businesses fewer restrictions on employment. Companies would have the ability to set up longer, temporary agreements with workers. They could require longer work days and use more part-time workers.

The Reuters news service says President Temer and leading lawmakers have redoubled their support of the pension plan. They believe that limiting pension benefits and raising the retirement age are necessary to fix the country's economic problems.

Brazil is currently in one of its worst recessions in more than a century. Temer says that without changes, the financial system could collapse. In a speech, he said his plan would keep Brazil from having to make the changes that European countries like Portugal and Greece were forced to make to rescue their economies.

On Wednesday, Moody's Investors Service amended its ratings for Brazil's sovereign credit rating from "negative" to "stable." The service said it was making the change because of Brazil's fiscal reforms.

Moody's said it expected the pension plan to pass Congress in the second half of 2017. And it said Latin America's largest economy was preparing to end its deepest recession on record.

Temer said Moody's decision was a recognition of his government's "efforts to recover credibility in the Brazilian economy."

The Associated Press and Reuters reported this story. Phil Dierking adapted the reports for VOA Learning English. George Grow was the editor.

benefit – n. money that is paid by a company (such as an insurance

company) or by a government when someone dies, becomes sick, stops working, etc.

fiscal – adj. of or relating to money and especially to the money a government, business, or organization earns, spends, and owes