Update Required To play the media you will need to either update your browser to a recent version or update your Flash plugin.
By Caty Weaver
19 July, 2019

Foreign Secretary Jeremy Hunt said one of the seized ships sailed under a British flag and the other sailed under Liberia's flag. 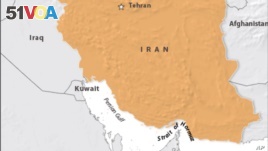 "These seizures are unacceptable," Hunt said. He then entered a government meeting to discuss how to gain the release of the ships and their crews.

There are few details about what happened. Iran said earlier Friday that it had seized an oil ship named Impero Stena and was holding it at an Iranian port. It said the Stena had not followed "international maritime laws."

The ship's owner, company Stena Bulk, said it was unable to contact the ship after unidentified boats and a helicopter move toward it in the Strait of Hormuz.

The company said the ship carried 23 crew members and was in international waters at the time.

Britain's Chamber of Shipping leader Bob Sanguinetti said the seizure represented an increase in tensions in the Persian Gulf. He said the act made clear that more protection for trade vessels was urgently needed.

He said the seizure violated international rules about behavior in international waters. The British government should do "whatever is necessary" to gain the safe and quick return of the ship's crew, Sanguinetti added.

The incident came one day after American officials announced that a U.S. warship downed an Iranian drone in the Strait. Iran has denied it lost an aircraft in the area.

In Tehran, the Iranian military said all its drones had returned safely to their bases. It also suggested that the United States might have shot down one its own drones.

On June 20, Iran shot down an American drone in the same waterway. U.S. president Donald Trump came close to answering the move with an airstrike but canceled it.

The Associated Press reported this story. Caty Weaver adapted it for VOA Learning English. ­­­­Ashley Thompson was the editor.

maritime - adj. of or relating to sailing on the sea or doing business (such as trading) by sea