Buffalo Meat on the Menu Again for Native Tribe

Update Required To play the media you will need to either update your browser to a recent version or update your Flash plugin.
By Mario Ritter
19 February, 2018


The Oglala Lakota tribe on the Pine Ridge Reservation in South Dakota is close to regaining its traditional food supply.

The Charging Buffalo Meat House will open for business soon. The business will process and package buffalo meat from the tribe's herd.

For hundreds of years, buffalo – also called American bison – were the main food source for the Indian tribes on the Great Plains of the central United States. But buffalo were not only food. They were important for clothing, shelter and even weapons and tools.

In the 19th Century, the U.S. Army found that the best way to force Indians onto reservations was to destroy the buffalo. Millions of animals were killed, and the buffalo came close to extinction.

Tribes living on the reservations could no longer eat their traditional diet. Instead, they ate foods the government provided, such as flour, oil and coffee. Over time, processed foods were introduced.

The reservation covers almost 9,000 square kilometers, but has only one supermarket. In addition, unemployment on the reservation is estimated to be at 80 percent. Many people buy low-cost food that often is low in nutrition. Obesity, diabetes and heart disease are major problems on the Pine Ridge reservation. The average life expectancy there is among the lowest in the U.S. 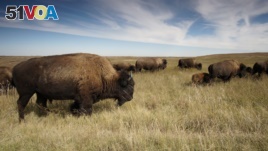 Bison numbers are recovering. These are in Theodore Roosevelt National Park, North Dakota.

Charles "Bamm" Brewer believes the tribe can improve its health by returning to a traditional diet of wild fruits, vegetables and buffalo.

He said he came to the idea 20 years ago. At the time, he was working in a yearly round up of buffalo to gather animals that may have strayed from the herd. It was then, he said, that he had a vision.

"As the buffalo ran, they kicked up snow and dirt," he remembered, "and they gave off hot steam. And all of this rose up into a huge cloud. And I ran right into that cloud with them."

He believes, at that moment, he stepped back into the past and had the experience of his ancestors.

He said, "They gifted me a message: 'Bring the buffalo back to the people.'"

Bringing back the buffalo

Brewer started by raising buffalo on his family's land. He began building his herd from animals on nearby national parks owned by the federal government.

Today he has a herd of about 50 animals, and buffalo meat has become an important part of his family's diet.

Brewer said that the Lakota and other tribes killed buffalo for food and shelter, never for sport.

"In our culture, when we hunt the buffalo, we say a special prayer to thank the animal for giving its life," he said.

About seven years ago, Brewer started working as a food program manager for a non-profit group called One Spirit. The group provides fresh food, fruits and vegetables to poor families. It also works to support the tribe.

Brewer then had the idea that One Spirit could build a meat processing center to process buffalo meat.

After launching a campaign to raise money, the Charging Buffalo Meat House project is nearly complete. To become fully operational, the project now needs about $15,000 for a heating and air conditioning system. The business would be identified as "custom exempt," meaning it would have state approval to process and package buffalo meat for individuals and hunters.

One Spirit says it could start selling meat to the public if it receives approval from the Food and Drug Administration.

The market for buffalo meat is large. The National Bison Association estimates that the industry is worth about $340 million dollars each year.

Meat not the only product

Jeri Baker is the director of One Spirit. He said that more can be done with buffalo than supplying meat.

"By building the Meat House, we aren't just providing employment," he said. "We're looking at all the things that could be done with the buffalo besides just having meat to eat."

The group wants to restart a traditional method of processing buffalo skins. One Spirit has sought the help of a tanner who uses the animal's brain in a process to prepare the skin, or hide, so that it stays soft even when it gets wet. Baker said providing hides could be a new industry.

Brewer said people liked the program. Then he laughed. He told how one tribe member didn't like the idea of eating buffalo.

Brewer explained, "That just shows us just how much this project is needed."

reservations –n. land in the U.S. that is kept for Native Americans to live

supermarket –n. a large store that sells many different kinds of food

round up –n. when herders gather together cattle or similar animals

vision –n. an experience similar to a dream that has religious or supernatural importance

tanner –n. a person who prepares leather and skins