Burning Bridges Is a Bold Move: in War and in Life

Every language has common words that are used in uncommon ways. Today we focus on the word "bridge."

A bridge is a structure that provides passage over something -- such as a river, train tracks, a highway or a deep, wide opening in the ground.

The word "bridge" can also be used to join things you can't touch, such as cultures or activities. For example, you could say music and art can bridge cultures. And language can be a bridge between two people.

But let's get back to the bridges you can actually cross – or drive a tank over. 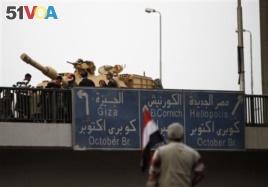 An anti-government protester looks towards an Egyptian tank on a bridge near Tahrir, or Liberation square in Cairo, Egypt, Thursday, Feb. 3, 2011. (AFP PHOTO)

An army that attacks across a river may decide to burn the bridge after crossing it. By burning the bridge, the army prevents its enemy from using it.

However, the army also destroys its own chance to go back across the river. Burning a bridge leaves the army open to attack.

The expression "burning your bridges" means to act in a way that destroys any chance of returning to the way things were. When you burn your bridges, there is no going back.

Let's put this expression in the workplace. You decide to take a new job. Now, you must tell your boss you are leaving your current job. During that conversation you tell him how much you hated your job, how much you hated working for him and how glad you are to finally leave.

You have just burned your bridge. You have destroyed your relationship with that boss. If things do not work out with your new job, there is no way on earth your old boss will take you back. Ever. And you can also forget about any good recommendation.

Burning your professional bridges can be foolish or it can be a bold career move. It is even bolder if you do it in a public manner.

For example, in 2014 a woman named Charlo Greene was a reporter on a news television show in Anchorage, Alaska. One night she reported on a business called the Alaska Cannabis Club. "Cannabis" is another word for marijuana. Marijuana is currently illegal in most U.S. states.

At the end of her report, Greene announced that she owned the Alaska Cannabis Club. She told the audience that she wanted to spend her time fighting for "freedom and fairness, which begins with legalizing marijuana here in Alaska."

Then she cursed, said she quit her job as a reporter and walked off camera.

Charlo Greene completely burned her bridges with that news station and probably every news station. No traditional media organization would ever take her back or give her a good job recommendation.

But Greene is okay with that.

She said later in an interview that if she quit by politely giving two weeks' notice, nobody would know about the issue she really cares about.

This brings us to another common expression using bridge: "I will cross that bridge when I come to it." This expression means to not worry about a future problem, but rather deal with it when it happens.

When it came to dealing with the problem of quitting her job, Charlo Greene certainly crossed that bridge when she came to it.

And then she burnt it to the ground.

In fact, people now mix these two expressions in a joking way. They say, "I'll burn that bridge when I come to it."

"Everyone I left behind each time I closed the door; Burning bridges lost forever more..."

Anna Matteo wrote this Words and Their Stories for VOA Learning English. Kelly Jean Kelly was the editor.

The song used at the end of this song is "Burning Bridges" by The Mike Curb Congregation. It was the theme song to the 1970 war movie, "Kelly's Heroes."