California City Drops Words Like 'Manpower' in Push to be Inclusive


In one California city, there will soon be no more manholes -- the holes workers use to go under streets to repair equipment and fix other problems. Instead, the manholes will now be called "maintenance holes."

And, nothing will be described as "manmade." The adjective soon will change to "human-made." 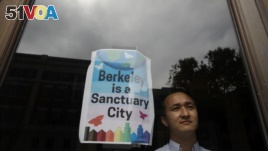 Leaders in the city of Berkeley voted this month to change about 40 gender-based words used in the city code. New, "gender-neutral" terms will appear instead. This means words like "manpower" will become "human effort" or "workforce." And, pronouns like "she," "her," "he" and "him" will be replaced by "they" and "them."

The effort, meant to create a more inclusive community, has received both praise and criticism.

Berkeley is within what is called the San Francisco Bay Area. It has a long history of progressive politics. It was among the first American cities to start a recycling pick-up program in the 1970s. More recently, it became the first city in the United States to tax sugary drinks and ban natural gas in new homes.

Robinson added,"As society and our cultures become more aware about issues of gender identity and gender expression, it's important that our laws reflect that."

The changes will cost taxpayers $600, Robinson said. They are set to take effect later this year.

Removing gendered terms has been slowly happening for many years in the United States at some colleges, companies and other places.

But the broad, city-wide change in Berkeley is "remarkable and sends a message," linguistics professor Kristen Syrett told the Associated Press. She is with Rutgers University in New Jersey.

"Anytime you're talking about something where gender is not the issue but you use a gendered term, that immediately sends a message of exclusion, even if it's a dialogue that has nothing to do with gender," said Syrett. She recently led an effort to update the rules on inclusive language for the Linguistic Society of America.

For 27-year-old Berkeley local Hel Baker, the approved measure is a small step in the right direction.

"I don't, by any means, think this is the great championing for gender equality, but you gotta start somewhere," Baker said.

Lauren Singh, who is 18, grew up in Berkeley. She approved of the move, saying, "Everyone deserves to be represented and feel included in the community."

Not everyone agreed with the move, however. Laramie Crocker, a builder in Berkeley, said the changes made him laugh.

"If you try to change the laws every time someone has a new opinion about something, it doesn't make sense. It's just a bad habit to get into," Crocker said.

Crocker, who is 54, said he would like city officials to center their efforts on bigger issues, like homelessness.

"Let's keep it simple, get back to work," he said. "Let's figure out how to get homeless people housed and fed. He, she, they, it — they're wasting my time."

gender-neutral - adj. describing a word or expression that cannot be taken to refer to one gender only

code - n. a set of laws or regulations

linguistics - n. the study of language and of the way languages work

dialogue - n. a conversation between two or more people

figure out - phrasal verb. to understand or find (something, such as a reason or a solution) by thinking