Update Required To play the media you will need to either update your browser to a recent version or update your Flash plugin.
By Pete Musto
03 August 2020


CES, one of the world's biggest technology conferences, will be an online event this coming January due to the coronavirus health crisis.

The decision marks a change for event organizers, who said in May it would take place as a smaller, in-person gathering in Las Vegas, Nevada. 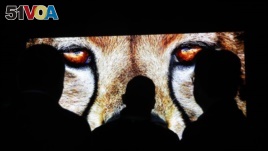 The decision also creates additional problems for Las Vegas. Like other popular vacation destinations in the United States, the city is suffering economically. More than 170,000 people attended the four-day show this past January, shortly before COVID-19 began to spread across the country.

In Nevada over the past two weeks, the average number of daily new coronavirus cases has increased 27 percent. The state is now listed sixth in the country for new cases of COVID-19 per capita.

The crisis has affected major technology events around the world.

Europe's biggest consumer electronics trade event, Germany's IFA, usually runs for six days. Last year, nearly 25,000 people attended the event. This year, it will run half as long and there will be no public access to the event, which will take place in September.

Web Summit, an event in Portugal that includes well-known heads of technology companies and famous people, will be online this time. Organizers aim to still hold a physical conference in Lisbon in December. But no final decision will be made until early October.

Trade shows are a place where people meet members of the industry, try new devices or make sales. The Events Industry Council reports that they represent $2.5 trillion in worldwide spending. Much of that is likely to be lost if events go online.

The Consumer Technology Association organizes CES. It had said in May that it planned to hold some events in Las Vegas next year. But Gary Shapiro, the group's CEO, said the group's thinking changed as COVID-19 cases rose sharply around the world. That makes it impossible to hold an indoor event in January 2021.

It is also unknown whether employees of big technology companies will be permitted to travel by next January. For example, Google said this week that its employees should work from home until at least July 2021.

The four-day online form of the CES show begins January 6.

Joseph Pisani reported on this story for the Associated Press. Pete Musto adapted it for VOA Learning English. Ashley Thompson was the editor.

conference(s) – n. a formal meeting in which many people gather in order to talk about ideas or problems related to a particular topic, such as medicine or business, usually for several days

destination(s) – n. a place to which a person is going or something is being sent