China and UAE Send Their First Spacecraft to Mars

Update Required To play the media you will need to either update your browser to a recent version or update your Flash plugin.
By John Russell
10 February 2021


Two countries sent their first spacecraft to Mars this week – China and the United Arab Emirates.

A Chinese spacecraft went into orbit around Mars on Wednesday. It followed a United Arab Emirates spacecraft that successfully entered orbit on Tuesday.

The UAE's spacecraft is called Amal. Amal is the Arabic word for Hope. Messages on the Hope Mars Mission's Twitter page announced the news in Arabic and English on Tuesday. "204 days and more than 480 million kms later, the #HopeProbe is now in the Capture Orbit of #Mars," one post said. 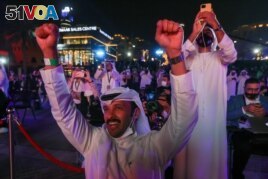 The trips to Mars come at a time when both countries have made quick progress in their space programs. China's secretive, military-linked space program brought moon rocks back to Earth in December. That is the first time a country has returned moon rocks back to Earth since the 1970s. China was also the first country to successfully land a spacecraft on the little-explored far side of the moon in 2019.

The UAE first announced its planned mission in 2014 and launched a National Space Program in 2017 to develop local experts. In 2019, Hazza al-Mansouri became the first Emirati in space when he flew to the International Space Station.

Both countries succeeded at something that has been difficult to do in the past. About 60 percent of all Mars missions have ended in failure, crashing, burning up or failing to reach orbit.

China's spacecraft will send a vehicle, called a rover, to land on the Martian surface. The goal is to search for signs of life in the area called Utopia Planitia, where the U.S. Viking 2 lander touched down in 1976.

Along with Tianwen-1, Amal will join six other spacecraft already operating around Mars. Three are from the United States, two are European and one is from India.

US rover to come soon

A NASA rover called Perseverance is aiming for a February 18 landing on Mars. It, too, will search for signs of ancient life, collecting rocks that will be returned to Earth in about 10 years.

All three of the latest missions were launched in July to take advantage of the closer distance between Earth and Mars at that time. Such an event happens only once every two years.

The U.S. first successfully landed on Mars with two NASA Viking missions in the 1970s. An American lander and rover are in operation there today.

John Russell adapted this story from Reuters and AP reports. Mario Ritter, Jr. was the editor.