China Lands Spacecraft on 'Dark' Side of Moon

Update Required To play the media you will need to either update your browser to a recent version or update your Flash plugin.
By Jonathan Evans
03 January, 2019


China's space program has become the first to land a spacecraft on the so-called dark side of the moon. The landing on Thursday brought the country closer to its goal of becoming a space power.

The China National Space Administration said the landing of the Chang'e 4 spacecraft at 10:26 in the morning Beijing Time has "opened up a new chapter in human lunar exploration."

Chang'e 4 sent a picture taken at 11:40 in the morning back to Earth. It shows a small crater and an empty surface that appears to be lit by a light from the lunar explorer. 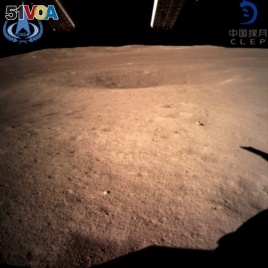 The name Chang'e comes from a Chinese goddess that many Chinese believe has lived on the moon for thousands of years.

The landing is an example of China's growing desire to compete with the American, Russian and European space programs. China also wants to strengthen its position as a regional and international power.

Soon after President Xi Jinping took office in 2013, he said, "The space dream is part of the dream to make China stronger."

Hou Xiyun is a professor at Nanjing University's school of astronomy and space science. He told the Associated Press, "On the whole, China's space technology still lags behind the West, but with the landing on the far side of the moon, we have raced to the front."

He added that China plans to explore Mars, Jupiter and asteroids in the future. "There's no doubt that our nation will go farther and farther," he said.

In 2013, Chang'e 3 made the first moon landing since the former Soviet Union's Luna 24 in 1976. The United States is the only country that has successfully sent a person to the moon. But China is considering a crewed mission, as well.

For now, China plans to send a Chang'e 5 spacecraft to the moon next year and have it return to Earth with collected particles.

The moon's far side is not always dark. But it is often called the dark side because it faces away from Earth and little is known about it.

Chang'e 4 will make astronomical observations and examine the structure and mineral composition of the ground above and below the surface.

Yu Guobin is a Chang'e 4 mission spokesman. He said, "The far side of the moon is a rare quiet place that is free from interference from radio signals from Earth."

He added the mission will "provide important information for studying the origin of stars and nebula evolution."

One difficulty of operating on the far side of the moon is communicating with Earth. Last May, China launched a satellite so that Chang'e 4 could send back information.

China carried out its first crewed space mission in 2003. It became only the third country to do so after Russia and the United States.

China has two space stations in orbit and plans to launch a Mars exploration vehicle in the mid-2020s. Its space program suffered a rare delay last year with the failed launch of its Long March 5 rocket.

Ken Moritsugu reported this story for the Associated Press. Jonathan Evans adapted it for Learning English. Ashley Thompson was the editor.

lag – v. to be in a position that is behind others

nebula – n. a cloud of gas or dust in space that can sometimes be seen at night; a group of stars that are very far away and look like a bright cloud at night

origin – n. the point or place where something begins or is created; the source or cause of something

regional – adj. relating to a part of a country, of the world, etc. that is different or separate from other parts in some way