Update Required To play the media you will need to either update your browser to a recent version or update your Flash plugin.
By Phil Dierking
11 June, 2018


It is officially summer beach season here in the United States.

While some popular beaches have hotels and businesses along them, others are protected from development by the United States government. Some of these areas are called national seashores. The National Park Service oversees them.

Changing climate and weather patterns, however, are threatening the future of the island. 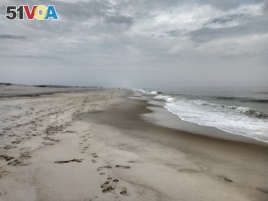 Assateague island is made mostly of sand, and stretches for 43.5 kilometers.

Assateague Island is a 43.5-kilometer barrier island. Barrier islands are long, sandy islands near the coast. The island is divided between the American states of Maryland and Virginia. People get to the island by driving over a long bridge.

Liz Davis is the public information officer for Assateague Island. She says Assateague owes its history to storms. She adds it was almost a very different place than it is today.

Davis said that, in its early history, the island had just a few small communities of people.

In the 1950s, plans began to build a town on the island called "Ocean Beach." In 1962, however, a very large storm hit Assateague. It badly damaged most of the island's structures and roads that were being built.

After the storm, the developers for Ocean Beach decided the area may be too difficult to build on. They sold the land to the state of Maryland. The government later turned the area into a national seashore.

Today, Assateague is a popular place to visit. It has welcomed at least two million visitors in each of the last 10 years. People can relax on the beach, surf in the ocean, hike along the island's paths or kayak through its many marshes.

But most people come to Assateague to see its unusual residents: wild horses. Wild horses are not easy to see in the eastern United States. But on Assateague, visitors can find them almost anywhere.

There are many stories of how the horses first came to Assateague. Davis says they are most likely descendants from horses owned by early farmers on the island. 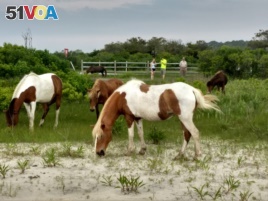 The wild horses of Assateague foraging for food on the island.

"Early farmers and landowners would put their livestock out on the Barrier Island. They would have forage year-round...our horses are descendants of some of those horses over 300 years ago that never got rounded up."

Davis says that because the horses have been living wild on the island for several centuries, they have adapted to its environment and small food supply.

"Their body shape is a little different because of their life on the island. They are a little shorter in stature. Stocky bodies and shorter legs... they have small ears, because they are in a wide open sandy, windy environment."

She adds that, despite the horses' size, they are still genetically horses and not ponies, a smaller animal related to horses.

Since the island is protected, the horses can move around freely. A recent survey of the horse population on Assateague found that there are about 82 horses on the island.

However, changing weather has affected the island.

Because Assateague is mostly sand, it is very sensitive to weather. Storms, ocean waves and rising sea levels have changed its shape over the years.

Davis says the island is "moving" west by one to 1.5 meters a year; the rising sea level is shrinking the island on its east side, while wind and waves move sand over to its west side.

She says, "I've been at Assateague for 26, 27 years, and I can definitely say I've witnessed the changes here.

"We are seeing stronger weather systems and rising sea levels. We are monitoring sea levels and changes in shorelines...We have data that showing that these changes are happening."

Davis added that the National Park Service has developed a plan for how to manage the island for the next 25 to 30 years.

The plans include replacing the asphalt in the parking lots with a more environmentally friendly surface that won't harm the water if it is washed away by rising sea levels.

Davis says the park also may be forced to move some of its ocean-side camping areas in the next few years. And, changes could include no longer permitting people to drive to the island.

"This is happening to our island and we need to be prepared for it," Davis said.

Do you know of any other beaches that are threatened by changing weather? Write to us in the Comments Section or on 51VOA.COM.

asphalt - n. a black substance that is used for making roads

descendant - n. someone who is related to a person or group of people who lived in the past

forage - v. to eat growing grass or other plants

inlet - n. a narrow area of water that goes into the land from a sea or lake

kayak - v. to paddle a long narrow boat that is pointed at both ends and that is moved by a paddle with two blades

livestock - n. farm animals (such as cows, horses, and pigs) that are kept, raised, and used by people

marsh - n. an area of soft, wet land that has many grasses and other plants

stature - n. the level of respect that people have for a successful person, organization, etc.