Update Required To play the media you will need to either update your browser to a recent version or update your Flash plugin.
By Alice Bryant
06 December, 2017


Climate change has had a number of effects on cities around the world, including rising sea levels. And, this has become an especially big problem for coastal cities. City officials must now prepare for higher tides on their coasts.

The American city of Miami is one example. Located in South Florida, Miami is home to nearly 3 million people and billions of dollars in land and buildings.

Miami is one of the cities in America most at risk for rising sea levels.

The waterfront is central to Miami's culture and economy. But as the seas rise with climate change, the water will not stay put.

Sue Brogan lives in Miami's Shorecrest neighborhood on a street that is just above sea level. She says she has seen some unsettling things happening after storms.

"So, this is your storm water drain, which is – water is coming up through." 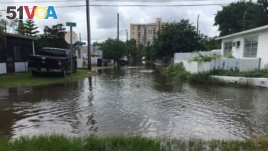 At the highest tides, the ocean rises from these drains into coastal neighborhoods like hers.

For now, it is only a small problem. But Brogan says it is going to get worse.

"It's more of a warning situation. Where is it going to go from this? And if we don't address these problems, locally and globally, we're going to have problems. Big problems."

Large parts of South Florida are in danger of being under water in the coming years.

It is costing the city a lot of money.

Eric Carpenter is the director of public works for Miami Beach. He says local communities will spend 500 million dollars for the improvements.

"Thankfully, our residents, the folks that are footing the bill for this work, realize that the cost of doing nothing is much greater."

City of Miami residents have also come to that realization. Voters just approved a 200-million dollar project to improve Shorecrest and elsewhere.

And the city has proposed solutions some residents are not happy about.

One of the proposals is to redesign whole neighborhoods.

A possibility officials are discussing with residents is for the city to buy homes in some places where flooding has been a problem. The city would then turn that land into parks of grassland that could hold the water.

However, that idea is not an immediate fix, says Miami's chief resilience officer, Jane Gilbert.

"It's really much more long-term. And we feel the more we are having those conversations now, the easier it is for everyone to adapt over time."

Over time, the city may need to take bigger risks. Miami's future depends largely on how much, and how fast, the oceans rise. 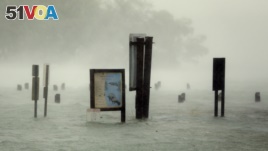 "We're going to have to leave sooner or later."

But, she says, a well-planned withdrawal could include measures to keep people safely in place for as long as possible. And, she says, the world could learn from such a model.

In these two Florida cities built on wetlands, there remains a lot of hopefulness.

Miami Beach public works director Eric Carpenter says solutions will depend on the willingness of city leaders to deal with the fear of change and find ways to pay for improvements.

"There's an engineering solution to every problem."

That may be a question South Florida and the world's coastal cities will be asking for many years to come.

Steve Baragona reported this story for VOA News. Alice Bryant adapted it for Learning English. Caty Weaver was the editor.

tide - n. the regular upward and downward movement of the level of the ocean that is caused by the pull of the sun and the moon on the Earth

drain - n. something, such as a pipe, that is used for removing a liquid from a place or container

address - v. to deal with a matter, issue or problem

resilience - n. the ability to recover quickly after difficulties