Update Required To play the media you will need to either update your browser to a recent version or update your Flash plugin.
By VOA
21 April, 2018


When it comes to reaching one's goals, there is a saying English speakers often use to explain the path to success. It goes like this:

Those words suggest that being hard working or knowledgeable is not the only way to get what you want in life. Very often it can even be more important to have a relationship with someone who can help you reach your goals.

Kenley Jones says that in a way, the same could be said of the process of applying to colleges and universities in the United States.

Jones is the director of international admissions at the University of Redlands, a private, liberal arts and science university in southern California. He says most U.S. colleges and universities often base their admissions decisions on an applicant's test results and school work. But he admits that this information does not always do the best job of explaining the strengths of each applicant. 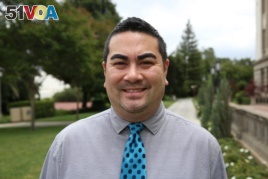 Kenley Jones, director of international admissions at the University of Redlands.

There are other parts of a college application that do more to describe personal qualities, says Jones.

For example, most U.S. colleges and universities ask applicants to list their activities outside the classroom. Also, many require applicants to provide a brief written statement that describes the kind of people they are.

But Jones notes that many students list activities which some admissions officials may know very little or nothing about. Some students may feel listing specific details of these activities is unimportant because they do not directly relate to their field of study, he says. And some students may be unwilling or unable to share this information about themselves in writing.

"There's many cultures out there where students taking upon themselves to stand out...about certain...things that they're involved in, socially, would be considered sort of a negative thing," Jones told VOA. "So sometimes it's very hard to get students, depending on the culture or situation, to expound on some of the things they're doing...And it takes, sometimes an active voice from someone else to...bring that to life and to our attention as well."

Jones argues that not every student has to be the strongest writer. That is especially true if students are applying to a program in which writing is not a major part of their duties. But in that case, they will need a recommendation from someone who is skilled in writing a letter in support of the applicant.

Most U.S. colleges and universities require applicants to provide at least one letter of recommendation, Jones says. However, these statements should not be from just anyone who knows the applicant. After all, he notes, admissions officials expect most applicant's friends and family to be extremely supportive of the student.

Schools want to hear from people who will speak honestly and objectively about an applicant, says Jones. Admissions officials want to hear what an individual outside the applicant's immediate circle of contacts thinks of that person. And they want to hear examples of the better qualities the student has demonstrated over the years.

Jones adds that, depending on who offers it, a letter of recommendation can bring attention to a quality a student might not think about. For example, an employer might be able to describe leadership qualities that an applicant may not know he or she is demonstrating.

However, recommendations do not always have to say how great an applicant is, he adds. The person writing the recommendation can explain to admissions officials how a student overcame a serious mistake. The writer could, for example, say how he or she witnessed the applicant getting caught doing something dishonest in school. But then the writer could say how the applicant learned the seriousness of the offense and demonstrated a change in behavior.

That is why asking the right people to write a letter of recommendation is important, says Jones. Some colleges and universities have rules about exactly who should write such letters. Admissions officers often want the writer to be a teacher the applicant studied under, often teachers of specific subjects. Jones says applicants should choose someone they have studied under recently.

If a school lets applicants name whomever they want to write a recommendation, he says, there are often plenty of people who would be a good choice. This includes religious leaders, leaders of sports teams, volunteer and social group organizers, work supervisors and co-workers. Almost anyone an applicant feels they have a strong relationship with would be a good person to ask.

Some applicants might feel unsure about who in their lives they might have this kind of connection with, Jones notes. In that case, the applicant should ask teachers, friends and family members who they think might be able to provide a strong recommendation.

But he also says just because an applicant wants a recommendation from a specific person does not mean that person will know how to write one.

We want to hear from you. How common is it for colleges and universities in your country to ask for letters of recommendation from applicants? Who do they expect these letters to come from? Write to us in the Comments Section or on 51VOA.COM.

apply(ing) – v. to ask formally for something such as a job, admission to a school, or a loan

expound – v. to give details about something

recommendation – n. the act of saying that someone or something is good and deserves to be chosen

objectively – adv. done based on facts rather than feelings or opinions

favor – n. in support of someone

comfortable – adj. not worried or troubled