Update Required To play the media you will need to either update your browser to a recent version or update your Flash plugin.
By Peter Musto
13 June 2020


Admissions tests have long been an important part of gaining entry to higher education. But coronavirus restrictions are causing education officials to reconsider how students take these tests – and some are wondering if they are needed at all.

Two of the most important tests for the college admissions process are the SAT and ACT. Most colleges and universities in the United States require applicants to take one of them.

The College Board operates the SAT, which is only offered a few times a year and must be taken in person at an approved test center. Last year, the College Board said that a record 2.2 million people took its test. But because of efforts to stop the spread of the coronavirus, the company canceled its March, May and June sessions this year. The company never made plans for an April session.

Charlie Astorino is the president of measurement for the ACT. He told VOA his company decided to move its planned April session to June 13. He also said more changes could be coming.

Astorino is hopeful testing centers will re-open in the U.S., China, Japan and Korea in a few months. But, he said, the future is still very unclear. He noted that, although it is an in-person test, the ACT has been entirely computer-based for years. So, the company is starting to experiment with ways to offer the test at a distance, online.

Astorino said his company is working on remote proctoring technology. This technology uses artificial intelligence, or AI, to observe students taking the test online at home through the cameras built-in to their computers. The AI technology ensures that student follow rules and records their work securely.

There are not many examples of this technology being used successfully to provide a test to groups as large as the 1.9 million students who took the ACT in 2018, Astorino said. But the growing popularity of a completely online test is causing companies to consider changes they may not have considered before.

"Really, what COVID is causing the entire industry to do is re-think where and how people can take tests," said Astorino. 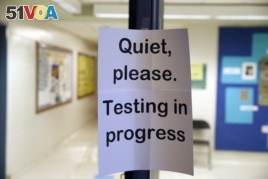 In this photo taken Jan. 17, 2016, a sign is seen at the entrance to a hall for a college test preparation class at Holton Arms School.

The TOEFL is one of most widely-used tests of English language ability in higher education worldwide. More than 11,000 colleges and universities in 150 countries use it for their admissions process. In March, ETS, the company that operates the test, launched the TOEFL iBT Special Home Edition test.

Srikant Gopal is the executive director of the TOEFL program for ETS. He said this special form of the test can be taken completely online using the company ProctorU's remote proctoring technology. Gopal added that it only took six weeks to develop, showing that a crisis can lead to important changes.

Yet Jennifer Dewar with the language education company DuoLingo said this technology has been available for years. In 2014, DuoLingo launched its own English ability test that was completely online and used AI proctoring from the beginning. Now over 2,000 institutions accept it for their language requirements.

Dewar said the coronavirus has shown that the traditional leaders in the testing field are not the best or even only option.

She said it is interesting that her service was able to prove that testing could be done online, at home and that it could be secure and valid. She added that DouLingo now is "the one that's been doing that for the longest."

Still, some experts worry that online tests might not be considered as valuable as traditional ones. Mehran Ebadolahi is the chief executive officer of Test Max, a test preparation company which offers study assistance to people taking the LSAT. The LSAT is the main admissions test for law schools in the U.S.

He said the LSAT Flex, an online form of the LSAT that was recently launched, is shorter than the traditional test. He worries that schools might value its results less.

"As you...compare students with traditional LSAT score(s) versus LSAT Flex, how will admissions committees look at that?" he asked.

He added that not everyone has access to strong internet or a quiet place to work at home.

However, some experts wonder if admissions tests like the SAT and ACT are necessary at all. In May, the University of California system decided to suspend its admission requirements for SAT and ACT results.

Bob Schaeffer said this move is proof of the growing popularity of what is being called the test-optional movement. Schaeffer is the director of Fair Test, an educational organization that works on admissions testing. It reports that over 1,000 schools have joined the movement.

He noted that a large amount of research shows that students whose parents have high incomes are more likely to perform well on the SAT and ACT.

"That would be fine if the test was designed to predict where you come from," said Schaeffer. "But its use is to determine where you can go, and that is where it becomes an inaccurate, unfair barrier to access."

Peter Musto reported on this story for VOA Learning English. Mario Ritter, Jr. was the editor.

applicant(s) – n. someone who formally asks for something, such as a job or admission to a college

session(s) – n. a period of time that is used to do a given activity

option – n. a choice or possibility

versus – prep. used to indicate two different things. or choices that are being compared or considered

inaccurate – adj. not correct or exact