Colleges Win Immigration Battle, But Fear for US Image Overseas

Update Required To play the media you will need to either update your browser to a recent version or update your Flash plugin.
By Pete Musto
26 July 2020


Colleges and universities in the United States are pleased with a recent government decision on international students. Yet many schools fear they are losing a larger fight over the nation's reputation as a place that welcomes the world's very best students.

U.S. university officials see it as a breakdown of what they have worked for. They are critical of President Donald Trump and his top aides. They say the Trump administration's repeated attempts to limit immigration have sent students a message that they are not welcome in America. Colleges say foreign students are listening: Since Trump was elected in 2016, the number of new international students coming to the U.S. has fallen by 10 percent after years of growth.

Already, there is concern that the coronavirus health crisis and a slowdown of visa processing could prevent thousands of students from returning in a few weeks. Foreign students now have trouble predicting what to expect after seeing how quickly policies can change.

Kim Wilcox heads the University of California, Riverside. She told The Associated Press there is a growing sense the U.S. is not a welcoming place.

"Higher education in the United States is still seen as the gold standard ... but access to it comes with all kinds of risks," said Wilcox.

The administration's latest policy would have forced international students in the U.S. to change schools or leave the country if their schools held classes entirely online because of the pandemic. Even those at universities offering a mix of online and in-person classes would have been barred from taking all their classes online.

More than 200 colleges supported legal efforts by Harvard University and the Massachusetts Institute of Technology, or MIT, to overturn the policy.

Seven other cases followed as colleges and state government officials questioned the guidance. Called to court to defend the guidance, federal officials cancelled it instead.

It was widely seen as part of Trump's campaign to pressure U.S. schools and colleges to reopen this autumn, even as the number of coronavirus cases rises.

But even in defeat, the policy added to the idea that American universities are no longer the welcoming places they once were. That is the opinion of Denis Wirtz, head of research at Johns Hopkins University in Baltimore, Maryland. The move comes as schools in Canada, Australia and other nations push for more international students. Over time, Wirtz said, those countries may win the world's top scholars. 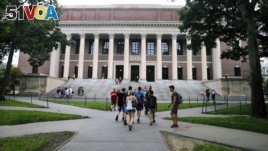 In this Aug. 13, 2019 file photo, students walk near the Widener Library in Harvard Yard at Harvard University in Cambridge, Mass.

It is painful for Wirtz to see. He came to the U.S. from Belgium in 1988 and remembers how warmly he was welcomed. Now, he warns future students and researchers that, off school grounds, there is growing anger towards immigrants.
"All those great scholars, wherever they are, India, China, Europe, may now ... go elsewhere or simply ... stay home," he said. "We will see its effect four, five years from now. It's not falling off a cliff, but over time you have this creep down ... toward mediocrity."

Leaders at other top research universities share his concern. Only hours after the administration withdrew the policy, the president of MIT released a statement. It warned that other countries are working hard to get students who have lost interest in the U.S. because of its growing anti-immigrant position.

There is also fear that the administration will return with an amended rule, as it did after a 2017 travel ban faced legal action. Hoping to ease concerns, many colleges have made statements promising to support their international students. And many say they are prepared to return to court if needed.

Daniel Diermeier, head of Vanderbilt University in Nashville, Tennessee, says it is not too late to repair the damage. The U.S. higher education system is still seen as the best in the world, but that could change, he noted.

"We're going to have to fix this very quickly," he said. "Talent will go where it sees the best opportunity for itself."

U.S. colleges already were preparing for sharp drops in the number of students coming from overseas. It is still unclear how many will arrive next month, but observers expect it to be far below the nearly 1.1 million who came last year. The decrease could affect budgets at colleges that depend on money from foreign students, who usually pay higher rates for their study programs.

But the effect includes much more than budgets, Diermeier said. International students represent a large share of the nation's research force, he said, especially in science and engineering fields. They also add a great deal to the economy, and without them it would suffer, he said.

College leaders called the latest legal battle a major victory that showed their power when they unite. But they already see other fights soon to come. The administration has shown it wants to limit a program that lets foreign students work up to one year during college or after they complete their studies. Colleges have also opposed Trump's recent suspension of new H-1B work visas, which many international students use to find work.

Collin Binkley reported on this story for the Associated Press. Pete Musto adapted it for VOA Learning English. George Grow was the editor.

gold standard – n. something that is considered to be the best and that is used to judge the quality or level of other, similar things

scholar(s) – n. a person who has studied a subject for a long time and knows a lot about it

creep – v. to go or seem to go very slowly

mediocrity – n. the quality of something that is not very good