Update Required To play the media you will need to either update your browser to a recent version or update your Flash plugin.
By VOA
10 July, 2015

An honor guard from the South Carolina Highway Patrol has removed the Confederate battle flag from the state Capitol grounds. The flag will be moved to a museum after 50 years at the state house. 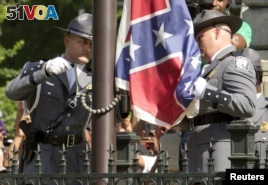 The Confederate battle flag is permanently removed from the South Carolina statehouse grounds during a ceremony in Columbia, South Carolina July, 10, 2015.

After the killings, activists renewed a long campaign to remove official public displays of the battle flag.

A powerful symbol ... but of what?

Flag opponents say the flag is a symbol of white supremacy and racial oppression. Southern soldiers used the flag during the U.S. Civil War of the 1860s, when they fought to keep slavery of African Americans legal in their states.

One hundred years after the South lost the war, officials raised the battle flag over the South Carolina state house. Flag opponents point out the flag remained on the Capitol grounds long after the anniversary of the war. They say the flag became a way to reject the 1960s Civil Rights movement to achieve racial equality.

Jonathan Blanks is with the CATO Institute. He says many people view the flag as a symbol of racial oppression.

"Because every time that the flag has come up, it has been used – and it has been – to assert this sort of racial superiority of whites against blacks, to stop, to end their civil rights."

Flag supporters say the flag is a symbol of the South's history. Lee Bright, a Republican state senator, says flying the flag in front of the state house honors the soldiers who fought for South Carolina's independence in the Civil War.

Some supporters add that the flag is also a fun way to celebrate Southern culture. They point to the popular 1970s and 80s television show called the "The Dukes of Hazzard." The show features a sports car with the Confederate battle flag painted on top. The car is called the General Lee, after a Southern commander in the Civil War.

On Wednesday night and Thursday morning, South Carolina members of the House of Representatives debated over the meaning and future of the battle flag. After more than 13 hours, they approved a measure to remove the flag from state house grounds.

Governor Nikki Haley, who supported the measure, used nine pens to sign the bill. Then she gave a pen to each of the families of the nine church shooting victims.

The flag comes down

On Friday morning, a racially diverse crowd of hundreds gathered on the Capitol grounds. They cheered and chanted, "USA, USA."

In a short ceremony, members of an official honor guard lowered the flag and rolled it tightly. Governor Nikki Haley said the flag will be put in its rightful place in a museum.

Other groups are also taking steps to remove the Confederate battle flag from the public eye. Some retailers -- including Walmart, Amazon and Sears – say they will no longer sell products with images of the Confederate flag.

And the Dukes of Hazzard car? U.S. golfer Bubba Watson bought the General Lee several years ago. He says he will paint over its Confederate battle flag roof with an American flag.

And that's In the News. I'm Kelly Jean Kelly.

Kelly Jean Kelly adapted this story from VOA reports. Hai Do was the editor.

Confederate – n. Of or relating to the Confederacy of the American Civil War

diverse – adj. made up of people who are different from each other

retailers – n. a business that sells things directly to customers