Update Required To play the media you will need to either update your browser to a recent version or update your Flash plugin.
By John Russell
20 May 2020


The coronavirus crisis is changing the world of autonomous, or self-driving, cars. More companies are now thinking about using the vehicles to deliver goods instead of people.

John Krafcik is the head of Waymo, a self-driving technology company owned by Google's parent, Alphabet.

Earlier this month, Krafcik told the Reuters news agency, "The reality right now is that goods delivery is a bigger market than moving people."

Waymo started out working on autonomous taxis, but has also been developing self-driving trucks and delivery vehicles. The company recently raised $750 million dollars from investors. It has signed deals with shipping company UPS and major retailer Walmart to test the delivery of goods.

But Waymo is not the only company raising new financing.

Over the past seven months, investors have put at least $6 billion into more than 20 companies working on autonomous delivery of goods and food. These include autonomous flying vehicles and heavy trucks, a recent Reuters study found.

Most of that investment – at least $4 billion since January – went to big companies like Waymo and Didi Chuxing, China's biggest ride-sharing company. Both companies are attempting to create separate autonomous vehicle services to carry goods and people.

While delivery robots built to operate on sidewalks have received much media attention, they have drawn little recent investment. Still, an increasing number of cities and companies are trying them out.

Christopher Bruno is head of the Fairfax, Virginia, economic development office. He worked to get Starship sidewalk robots on the streets as soon as the coronavirus crisis shut down the area. "I think without a crisis, there would have been some skepticism as to whether this would have been used or not," Bruno said. Skepticism refers to a kind of doubt.

Bruno said even though the approval process for new businesses usually takes six to 10 months, "we did it in a week and a half." Currently, 20 robots are delivering food and other products in Fairfax. 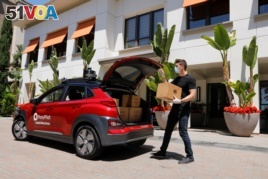 Some investors warn that recent media coverage has increased hopes too much about autonomous delivery services, which still face technical and legal difficulties.

Quin Garcia is the managing director of Autotech Ventures. He noted there is a certain amount of hype - talk that makes people excited - around autonomous delivery.

"While there's increased hype around automated delivery right now due to coronavirus," he said, "this health crisis will be mostly resolved in a few years from now before automated on-road delivery is ready for mass adoption."

All the companies are involved in money raising as demand for their delivery services has increased.

James Peng is the founder and CEO of Pony.ai. The company recently carried out tests of its vehicles for food deliveries in California during the pandemic.

Peng noted that the virus crisis has created a "need to provide some much needed food and package delivery services."

Jane Lee and Paul Lienert reported on this story for Reuters. John Russell adapted it for Learning English. Bryan Lynn was the editor.

retailer – n. a person or business that sells things directly to customers for their own use

sidewalk – n. a usually concrete path along the side of a street for people to walk on

adoption – n. the act or process of beginning to use something new or different

take advantage of – phr. to use (something, such as an opportunity) in a way that helps you : to make good use of (something)