Update Required To play the media you will need to either update your browser to a recent version or update your Flash plugin.
By Alice Bryant
11 July 2020


As coronavirus infection rates rise sharply in the U.S., the White House is pressuring schools across the country to reopen for the autumn term.

At a recent White House talk on school plans for the fall, President Donald Trump argued that some officials are keeping schools closed for political reasons, not because of health concerns.

And, Education Secretary Betsy DeVos told governors during a recent conference call that she opposes plans by some school districts to limit in-person classes to only a few days per week.

Such pressure from the federal government adds to an already complex situation, as schools across America make difficult decisions about how to restart classes.

Plans for the coming school year are taking shape each day. They are different from district to district and from state to state.

Debates about such plans have been highly emotional, with anger growing among parents and administrators. They have been made more troubling by record numbers of COVID-19 cases reported each day. 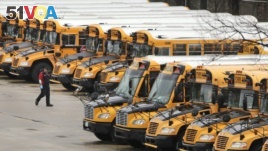 In Florida, some school districts want students back in the classroom in early August. But cases there have been rising. On average, Florida has been reporting more than 7,000 new cases a day. That is more than seven times what the state was reporting one month ago.

The state of New Mexico has been able to avoid major outbreaks. The state is planning a model that includes online and in-person learning.

Parents in New York State have demanded that schools reopen in the fall. In Maine, outdoor learning is planned.

Districts nationally are putting together rules for wearing face masks. Some districts want all students to wear them. Others plan to limit the requirement to older children.

Each of these decisions tries to balance health concerns with regaining as much normalcy as possible. Parents are tired and desperate for help after months of balancing full-time work and full-time home schooling. Children, separated from their friends, have a strong desire to socialize. Teachers remain concerned because so much is still unclear about the virus.

Districts are worried about being able to pay for added supplies — including masks and more buses. And school officials said the rise in virus cases could ruin reopening plans before they are even put in place.

"If we see large outbreaks happening across communities, it's going to be very hard to keep schools open," Dr. Ashish Jha told Fox News Sunday, a television program. He is director of the Harvard Global Health Institute.

Schools across the U.S. shut down suddenly this year as coronavirus cases first began rising. That led to a mix of distance learning, poorly planned homeschooling and, for some families, no schooling at all.

Districts are now turning their attention to how to create more structured environments. But the debates have been filled with uneasiness.

Near Rochester, New York, parents strongly supported fully opening schools. A group of them recently gathered outside a school administration building. They held signs that said, "No normal school? No school taxes!"

Christina Higley is a parent in the small city of Webster, outside of Rochester. She said she had started a Facebook group to demand answers from school officials and be part of the decision-making process related to changes at local schools. The discussions there launched a movement for reopening schools.

"There's a lot of parents that are saying ‘Open our schools. Let us have the decision if we feel comfortable sending the children into them,'" Higley said.

The decisions are even more complex in districts where case counts are rising. In Manatee County, Florida, the working plan is for all younger students to return to school full time on August 10. Older students would depend on online learning while they are brought back into school buildings slowly over time.

But that proposal is not finalized because of a sharp rise in infections. The area recorded its highest number of new cases in a single day in late June.

If a student is confirmed to have the virus during the new school year, classrooms or whole buildings would need to be carefully cleaned, said Mike Barber, a district representative. Students and workers with confirmed infections would not be able to return until they had tested negative two times.

Medical experts have expressed concerns for children's development and mental health. The American Academy of Pediatrics is a professional organization of children's doctors. The group said it strongly supports the goal of students being physically present at schools.

In Cape Elizabeth, Maine, Shael Norris said she is especially concerned about children who could face abuse at home and parents who risk losing their jobs to care for their children. Norris has two children who will attend high school in the fall and runs a nonprofit organization that fights sexual violence.

Maine has not had a major coronavirus outbreak. It is now reporting only a small number of new cases each day. Still, the state's largest school district of Portland has left all choices on the table: a full reopening, a partial reopening or fully online learning.

The district sent a letter to parents that said it plans to use outdoor space when possible. But that solution can only work in Maine for a few months of the year because it can get extremely cold there.

In New York, Governor Andrew Cuomo has repeated that he has the power to decide when schools in his state will reopen.

Cuomo said, "We want kids back in school for a number of reasons, but we're not going to say children should go back to school until we know it's safe."

This story combines reports from the Associated Press and VOA News. Alice Bryant adapted them for Learning English. Ashley Thompson was the editor.

school district - n. an area or region containing the schools that a school board is in charge of

outbreak - n. a sudden start or increase of disease

desperate - adj. very sad and upset because of having little or no hope

distance learning - n. a method of study where teachers and students do not meet in a classroom but use the Internet to have classes

negative - adj. not showing the presence of a particular germ, condition, or substance

on the table - expression. When something is on the table, it's an option, especially one that could be negotiated.