Update Required To play the media you will need to either update your browser to a recent version or update your Flash plugin.
By Christopher Jones-Cruise
20 August, 2017


Detroit, Michigan has earned the name "America's Comeback City" for a reason.

The city was especially hard hit during the Great Recession, which started in 2007 and continued to 2009. At one point, Detroit had an unemployment rate of 28.4 percent. Many businesses closed and some Detroit natives left the city. But by June 2017, the jobless rate was 7.8 percent.

Detroit's economy is improving, in part, because it has welcomed so many immigrants. They are opening new businesses, which have created jobs and made their neighborhoods safer. Yet some observers believe that, while the lives of immigrants are improving, the city is not.

Ehsan Taqbeem founded the Bangladeshi-American Public Affairs Committee. He is one of many immigrants who are trying to strengthen Detroit's economy.

Taqbeem talked to a VOA reporter about his neighborhood.

"This is the main street of Banglatown. All the commercial districts are right here. This is where the revitalization is taking place..."

Banglatown was once a very poor neighborhood in Detroit. But Taqbeem and others are working to make the area a place that people want to visit.

"You will hardly find any vacant spot right now. The value of the homes have gone up since then, businesses have been thriving, and traffic has gone up tremendously."

Groups like Global Detroit and the New American Economy have found that the arrival of immigrants has slowed the drop in the city's population. They say immigrants are also responsible for rising housing prices. And they have created, or have helped keep in place, more than 1,700 local manufacturing jobs.

A study by the two groups found that the number of immigrants in Detroit grew by 12.1 percent between 2010 and 2014 -- or 4,137 individuals. At the same time, the city's population dropped about 4.2 percent. 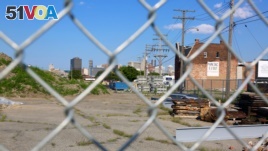 But some observers do not believe that immigrants are the reason the city is recovering. And they say Detroit still faces many tests.

Stanley Renshon teaches political science at the City University of New York. He told VOA that immigrants alone will not save Detroit. He says "any economic activity is grabbed by economists as positive."

"You increase the overall financial numbers of the country, but the people who benefit most from that are the immigrants themselves. And that's fine, you know. We want them to prosper, but please don't tell me that what you're doing is saving the country or the city or the town."

Renshon says Detroit has a long history of political corruption and one of the highest murder rates in the country. He says those problems cannot be solved by new immigrants.

"Immigrants are leading in the city's recovery," he says. Tobocman adds that "new residents are moving in and helping to stabilize working-class communities by fixing up homes, opening up businesses and creating more consumers."

"We see a hard-working yet very low-income community, and what I expect to see is through people moving into the city -- particularly because immigrants are driving that -- neighborhoods stabilizing, and those communities that stabilize will begin to retain and attract new businesses, create more jobs, and that is the pathway forward."

Tobocman says depopulation remains the biggest problem facing Detroit. He says immigrants are "our best hope to rebuilding, especially on the neighborhood level."

commercial district – n. places where stores and businesses are located

revitalize – v. to make (someone or something) active, healthy or energetic again

vacant – adj. not filled, used or lived in

thrive – v. to grow or develop successfully; to flourish or succeed

grab – v. used as an example

prosper – v. to become very successful usually by making a lot of money