Did a Danish Artist Steal Money or Make Art?

Update Required To play the media you will need to either update your browser to a recent version or update your Flash plugin.
By Dan Friedell
30 September 2021


A museum in Denmark gave an artist over $80,000 to create a piece of art for an exhibition about work and money.

The Kunsten Museum of Modern Art was surprised when Jens Haaning sent two empty canvases. He said it was art.

He called the work "Take the Money and Run." 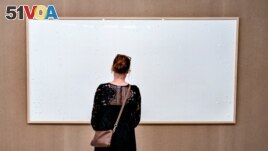 The museum paid Haaning about $3,900 to make the art. It was supposed to be created from thousands of dollars of bank notes attached to the canvases. The museum also gave him the bank notes.

The work was supposed to be similar to his past works that used the bank notes to show the average yearly wage in Denmark and Austria.

Haaning told a Danish radio broadcaster: "The artwork is that I have taken the money."

He did not say where it was, or if he planned to give it back.

Haaning is known to create art that makes people think.

He said the art, or lack of art, depending on how you view it, shows his current work status.

"I encourage others, who have just as miserable working conditions as I, to do the same," Haaning said. "If they are being asked to give money to go to work, then take the money and run."

The Kunsten Museum says the artist broke an agreement that he would make a piece of art. However, it has not reported Haaning to the police. The exhibition closes in January. If he returns the money at that point, it may not.

Haaning says he did not commit a crime, and what he gave the museum is art.

What would you do about the missing money? Tell us in the Comments Section and visit 51VOA.COM.

exhibition – n. an event at which objects (such as works of art) are put out in a public space for people to look at : a public show of something