Does ‘The Chair’ Show What American University Life Is Like?

Update Required To play the media you will need to either update your browser to a recent version or update your Flash plugin.
By Dan Friedell
09 October 2021


The Chair is a new program about life at an American university that might be of interest to foreign students coming to the United States.

The main actor in the show is Sandra Oh. In The Chair, Oh plays Ji-Yoon Kim, an English professor at a fictional college in the northeastern U.S. When the show begins, Kim is in her first days as the leader, or chair, of her department. She is the first woman to have the job.

Kim oversees a group of professors and also talks often with another official of the university, a dean. They discuss many issues. These include: how to increase the number of students in English classes, how to add more professors of different races and ethnic groups and whether older, unpopular professors should keep their jobs.

The show brings up problems facing college professors and their leaders in 2021. It talks about how Black professors feel while working at schools where the students and teachers are mostly white. It talks about whether universities should change the system of offering tenure to professors. And it asks if professors should have the freedom to teach the way they believe they should.

It also looks at the trouble Kim has dealing with her job and her home life. She is a single parent of a young, adopted daughter and has a retired father who lives in the same town. Oh's character speaks Korean with her father and tries to teach the language to her daughter.

All the issues come up in just six programs. The show is not real and is a comedy. It is not trying to be a real record like a documentary. But it does present real problems at colleges. 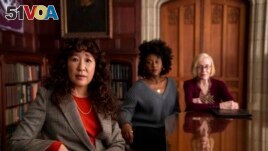 Sandra Oh, Nana Mensah and Holland Taylor work together as English professors in 'The Chair.' (Eliza Morse/Netflix via AP)

So, how well does The Chair show life on a college campus in 2021?

Jay Belsky is a professor of Human Development at the University of California-Davis. Belsky started his work in higher education in the 1970s when he completed degrees at Cornell University in New York.

He said the stories presented by The Chair are close to life on a college campus in 2021. However it is unlikely all the difficult events would happen at once.

In addition, Belsky said Pembroke, the fictional college of The Chair, only represents the environment at a small number of U.S. universities.

"While some of the ‘woke-ness' and political correctness is at all of them, it's probably a lot more intense and apparent and all-encompassing at those elite of elite schools."

Shera Bhala is in her final year of study at Dartmouth College in New Hampshire. Dartmouth is one of the oldest colleges in the U.S. and an Ivy League school.

Bhala wrote about The Chair, for The Dartmouth, the student newspaper.

In her report, she wrote that the show captures the "peculiarities" of life on a college campus and noted that it balances being a comedy with "tragic realities." She also commented that the outdoor scenes from The Chair reminded her of Dartmouth although the show was mostly filmed in Pennsylvania.

Is The Chair good to watch for a student considering study in the U.S.? Bhala thought of her mother, who grew up in Malaysia. She said her mother often asked whether life at an American high school and college was like the life shown in movies and television.

"Yeah, I think for a student from Asia or anywhere outside America, I think it could be a very interesting show to watch."

Bhala approved of the show's attempt to show an Asian woman as a university leader. She noted that U.S. universities are currently "having really important conversations about diversity."

Oh's parents came to Canada from South Korea in the 1960s. Speaking to the Associated Press, she said it was important that her character had a Korean first name. Her best-known television characters have been named Cristina and Eve.

"To be actually able to put a Korean name and have all the characters say your name. It really appealed to me," Oh said.

The Chair is the first movie or television show in a number of years to tell a story about a professor at an American college. Some critics said it is the first to do so since The Wonder Boys. That film came out over 20 years ago.

The Chair shows two sides of Kim's life: as a university leader and as a single parent.

While Bhala is a young person, she has experience with academia because she followed her father, who is a professor at the University of Kansas.

She said she is glad the show tries to show current college life.

"The show definitely has kind of this current perspective which was refreshing to see in a show about academia."

Belsky, the Human Development professor, said it is important to remember that Kim leads the school's English department. He proposed that a show about engineering or chemistry might be very different.

"So, I think you really have to make a distinction between the humanities and social sciences versus the rest of the campus."

Belsky also proposed that while the show is getting noticed, it is possible that it may only connect with a small percentage of Americans. Not many people in the U.S. attended schools like the one in The Chair.

Bhala thought one part of the show was overstated: The idea that older professors are out of touch and unable to connect with the current college students.

"I've been really lucky to have professors who are energetic, brilliant and like on top of any new developments in their fields."

Dan Friedell wrote this story for Learning English based on original reporting and material from the Associated Press. Mario Ritter, Jr. was the editor.

Have you seen The Chair yet? Are there television shows based at colleges where you live? Tell us in the Comments Section and visit 51VOA.COM.

fiction –n. written stories about people and events that are not real

tenure –n. the right to keep a job, especially the job of being a professor at a college or university, for as long as you want to have it

adopted –adj. a child who is legally the child of parents other than the birth-parents

campus –n. the area and buildings around a university, college, school or similar organization

woke –adj.(political) a feeling of knowing that social and racial problems exist and that they are important

political correctness –n. agreeing with the idea that people should not use language or behave in a way that could offend a group of people

elite –adj. the people who have the most wealth and highest position in a society

academia –n. the life, community, or world of teachers, schools, and education

perspective –n. a way of thinking about and understanding something (such as an issue or life in general)

humanities –n. areas of study (such as history, language, and literature) that relate to human life and ideas

brilliant –adj. much more intelligent than most people