Update Required To play the media you will need to either update your browser to a recent version or update your Flash plugin.
By Bryan Lynn
04 January, 2019


Apple says dropping demand for iPhones in China will cause its overall revenue to fall well below previous predictions.

Apple chief Tim Cook addressed the issue in a letter to company shareholders on Wednesday. Cook warned that the company's latest revenue guidance would be lowered to $84 billion. That was down from an earlier estimate of $89 to $93 billion.

The news caused Apple stock to trade sharply lower. It also led to big drops overall in the U.S. stock market, as well as other financial markets around the world.

The development was the latest sign of increasing economic concerns among Chinese buyers. The iPhone is Apple's biggest product. It made up about 60 percent of the company's revenue in the last quarter reported. 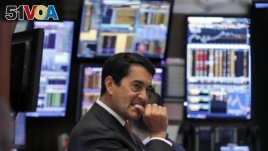 Trader Mark Muller works on the floor of the New York Stock Exchange, Thursday, Jan. 3, 2019. Stocks went into a steep slide Thursday after Apple sent a shudder through Wall Street with word that iPhone sales in China are falling. (AP Photo/Richard Drew)

But Apple's new $1,000 iPhones are a difficult sell to Chinese consumers worried about the economic future, as trade tension continues between China and the United States.

Apple's lower prediction added to concerns that the iPhone maker will keep losing ground in the important Chinese market. Experts say many Chinese consumers are likely to reject Apple's iPhone price increases and instead buy less costly models from competitors.

The country is still one of the world's fastest growing economies. China reported a third-quarter economic growth of 6.5 percent – stronger than most other major economies. But that was the country's lowest rate of growth since the 2008 world economic crisis.

Economic experts have blamed Chinese consumer concerns on the country's tariff dispute with the United States as well as an increase in news about falling automobile and real estate sales in China.

David Dollar is a China specialist at the Washington-based Brookings Institution. He described the change in how Chinese buyers see the future as "definitely worrying." He added that overall, "consumption growth" is slowing down across China. The Associated Press reported his comments.

Emily Li is a 37-year-old advertising designer in Beijing. She told the AP she is delaying buying another car or making other major financial decisions right now. "People are worried about losing jobs," she said.

Weakness in Chinese demand is especially painful for Apple and other smartphone makers. China makes up one-third of the industry's shipments worldwide.

Estimates from research company IDC showed smartphone shipments to China fell 10 percent from a year earlier in the quarter that ended in September.

In his letter to Apple shareholders, Cook gave no China sales numbers for the final quarter of the year. But he said sales decreased as consumer "uncertainty" grew over the U.S.-China trade dispute.

Worldwide, Apple fell behind Huawei to become the number three brand by number of handsets sold in the third quarter, IDC reported. South Korea's Samsung Electronics was in first place.

revenue – n. large amounts of money received by a company or government

uncertainty – n. the act of not being sure about or not being able to decide about something