E-Cigarettes Safer, But Not Risk Free

Update Required To play the media you will need to either update your browser to a recent version or update your Flash plugin.
By VOA
27 May, 2014

Cigarette smoking kills. That we know. So, manufacturers made electronic cigarettes as a safer smoking choice - safer than tobacco.

E-cigarettes contain the drug nicotine like cigarettes. But they do not use tobacco. And you do not light them. They are powered by battery. 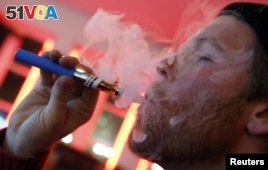 A man with an e-cigarette at an e-cigarette lounge in New York City.
So, if e-cigarettes are so safe, why have poison control centers around the United States seen an increase in telephone calls about e-cigarette poisonings?

The answer is children.

Most of the calls are from people worried about children who have played with the devices. In the period of one month this year, the United States Centers for Disease Control say 215 people called the Center with e-cigarette concerns. More than half of these calls were for children ages five and younger. The devices apparently had made them sick.

Tim McAfee is director of the CDC's Office on Smoking and Health. He says the problem is regulation. Meaning, the U.S. federal government does not control e-cigarettes even though they contain liquid nicotine. Mr. McAfee adds that liquid nicotine is a well-known danger.

"Nicotine historically has been used as a pesticide in the United States. And that's where we have really had for many, many decades significant poisonings when people got exposed to nicotine that was in liquid solutions."

Mr. McAfee explains that nicotine poisoning happens when the substance gets into the skin, gets into the eyes or is swallowed. Even a small amount, he says, can make a person sick.

Tim McAfee says e-cigarettes do not create the level of risk to people that tobacco products do. He notes that almost 500,000 Americans die each year from cigarettes.

"So, cigarettes are the winner in that contest. And we don't really know what's going to happen with e-cigarettes."

E-cigarettes do not contain hundreds of harmful chemicals that are found in real cigarettes. So, the U.S. Surgeon General has suggested that e-cigarettes may be a useful tool for adults trying end their tobacco use, or quit.

But McAfee worries that teenagers may think electronic cigarettes are harmless. They could become addicted, or hooked, on the nicotine and then start smoking real cigarettes. In other words, he fears that for young people fake e-cigarettes could be a "gateway" to the real thing.