Update Required To play the media you will need to either update your browser to a recent version or update your Flash plugin.
By Bryan Lynn
24 November 2021

The city, to be created in the eastern area of La Union, will be powered by a nearby volcano, President Nayib Bukele recently announced.

The announcement came during an event held as part of the country's weeklong Latin American Bitcoin and Blockchain Conference.

In September, El Salvador became the first country in the world to make bitcoin a legal currency. The country has used the U.S. dollar for more than 20 years.

Bukele said the planned city would be financed with bonds linked to virtual currencies, also known as cryptocurrencies. Bitcoin is the world's biggest cryptocurrency. 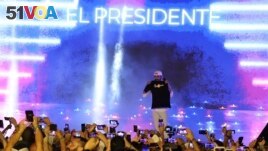 El Salvador plans to issue $1 billion worth of "bitcoin bonds" in 2022, said Samson Mow, who appeared at the event with Bukele. Mow is an executive with Blockstream, a blockchain technology provider.

After the financing is ready, the building of the "Bitcoin City" could begin within 60 days, Bukele said. Mow added that the city could make El Salvador "the financial center of the world."

The city is to be built near the Conchagua volcano. Officials said the volcano will produce geothermal energy to power both the city and the bitcoin mining process. Geothermal power centers capture high heat from below Earth's surface. The heat creates steam that can turn machines to produce electricity.

Bitcoin mining is the process by which new bitcoin is created using computers that solve complex mathematical problems. The mining process requires huge amounts of energy.

Bukele said the project would create "a fully ecological city that works and is energized by a volcano."

The government said it will provide land, infrastructure and low taxes to gain investors. The only tax to be collected will be a value-added tax (VAT). Bukele said there would be no property, income or local taxes. He added that the city is expected to add no carbon dioxide to the atmosphere.

The government is already operating a Bitcoin mining test project. It is near another geothermal area beside the Tecapa volcano in the eastern part of the country.

The government plans to use half of the new tax it collects to finance the bonds sold to build the city. The other half would be used to pay for local services. Bukele estimated that public infrastructure projects would cost about 300,000 bitcoins.

The goal of the city will be to bring in new foreign investments. Bukele invited companies from around the world to join the project and promised that such efforts would pay off. "Invest here and make all the money you want," he said.

The city is expected to include housing, stores, restaurants and a port, the president said. He also talked about plans to offer digital education and public transportation that does not harm the environment.

The government is currently supporting bitcoin with a $150 million fund. To get Salvadorans to use it, the government offered $30 of credit to those using the currency's digital wallet.

Bitcoin was first created to operate outside of government controlled financial systems.

The Salvadoran government has said bitcoin could reduce the cost for Salvadorans living in foreign countries to send money home to their families.

The Associated Press, Reuters and Agence France-Presse reported on this story. Bryan Lynn adapted the reports for VOA Learning English. Mario Ritter, Jr. was the editor.

blockchain – n. an online database containing information that can be used and shared within a large network open to the public.

fund – n. an amount of money collected, saved or provided for a particular purpose