Update Required To play the media you will need to either update your browser to a recent version or update your Flash plugin.
By Caty Weaver
13 June 2022


In Guatemala, environmental workers have set up a steel screen across a dirty river to try to trap plastics and other pollution.

The Ocean Cleanup, a non-profit group based in the Netherlands, is leading the effort on the Las Vacas River near Guatemala City. The environmental group employs equipment made specially to capture and remove pollution from the water. The aim is to stop the flow of plastics and other trash before it can enter the ocean. 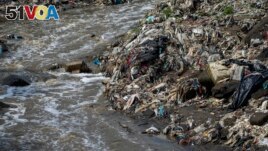 The rainy season in Guatemala begins in May and lasts for several months. Levels of pollution in the river increase during the rains and the trash flows farther and faster.

But The Ocean Cleanup's Interceptor Trashfence is already doing its job to block much of the pollution.

The screen is grounded on both sides of the river. The device has caught so much trash that that one part of it looks bent.

"What we are trying to do is help clean up," said Boyan Slat, founder, and director of The Ocean Cleanup. "We have never seen plastics pollution like this," he added. Slat estimates the Las Vacas River carries about 20,000 tons of trash every year.

The next step in the process is to clear the trash from the fencing. The environmentalists are testing to try to find the best way to set up and use the barrier.

"We continue to evaluate variables such as fence height, mesh size, and foundation security during this pilot period in Guatemala," the group said in a statement.

Hondurans have protested about the trash problem because a lot of it washes up on the country's coast.

screen –n. a flat surface made of small wire woven together that lets air or water pass through

evaluate – v. to judge the value or condition of

variable – n. something that changes or can be changed