EU to Require One Connector for Phones, Electronics in Europe

Update Required To play the media you will need to either update your browser to a recent version or update your Flash plugin.
By Matthew Caputo
08 June 2022


A new proposed rule from the European Parliament and Council means that American company Apple will have to change the charging connector for its devices sold in Europe.

The rule says that the USB Type-C charging connection will be required on popular electronic devices by the autumn of 2024.

The rule will affect mobile telephones, tablet computers, cameras, listening devices, and other electronics. In addition, laptop computers will be required to have the connections 40 months after the rule takes effect. 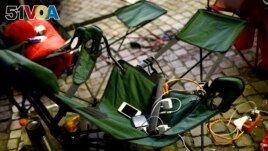 Power cords and battery chargers for Apple devices are seen on a foldable chair as people camp outside an Apple store in Franfurt, Germany. (FILE - REUTERS/Kai Pfaffenbach)

The political intervention came after companies did not agree on one connector for all their products. The European Commission said the change would make life easier for buyers and save them money.

The European Parliament has been trying to require all companies to use only one charging connection or port for more than 10 years. Lawmakers said people were angry that they had to switch between cables to use Apple or Android-based products.

Commissioner for the Internal Market Thierry Breton said the rule would save 267 million dollars for buyers. He added that the proposed law will let new technology develop without harming buyers or causing problems in the market.

A European Commission study said that USB Type-C ports are in 29 percent of mobile phones sold now. The European Parliament released a statement saying that, "By autumn 2024, USB Type-C will become the common charging port for all mobile phones, tablets and cameras in the EU." The charging port on the iPhone, called the Lightning cable, is used in about 21 percent of phones.

In the past, Apple has warned that a law requiring one kind of charging port would harm new technology development. The company has also noted that throwing away old cables would create more unnecessary waste.

Researcher Angelo Zino said that the proposed law could cause iPhone sales to increase when it goes into effect. The law could cause Europeans to buy new phones instead of keeping older ones with different ports.

"Existing consumers can still use the Lightning cable, but maybe there would be less purchases of older products..." he said.

Bloomberg news service recently reported that Apple is already designing an iPhone with a USB Type-C charging port. It could come out next year.

However, the EU could make buyers angry if it bans the sale of older phone models. For example, older phone models normally become less costly when new models are released. If older models are no longer available, buyers would be forced to buy new, more costly devices.

Although Apple has warned against such laws in the past, some experts predict that the law could increase Apple's stock value.

The European Parliament and the European Council must now officially approve the rule later this year. It will go into effect two years after that.

charge –v. to put electricity into an electronic device so that it can operate

cable – (n.) a group of wires or glass fibers, covered in plastic or rubber that is used to carry electricity or electrical signals

What do you think about charging cables? We want to hear from you. Write to us in the Comments Section.