Update Required To play the media you will need to either update your browser to a recent version or update your Flash plugin.
By Carolyn Nicander Mohr
26 April, 2017


Last week, we reported about Facebook's efforts to develop a system to permit people to type "directly with their brains." Such technology could help hundreds of millions of people who cannot read or write get their thoughts in print. It could also make communication easier for people with limited movement ability.

The possibility is interesting. But it is far from the only plan announced last week at the Facebook's developers' conference, or F8.

Facebook officials also offered similarly wild ideas. How about technology that permits you to hear with your skin instead of your ears, for example. Or maybe you would be more into a system that lets you playing games and visiting your friends in augmented and virtual reality.

Facebook says it plans to make these activities a reality within the next 10 years.

Or not. Not every Facebook venture is a success. You do not see many Facebook phone users, for example.

Hearing with your skin

This technology could help people with limited or no hearing ability.

Facebook hopes to have your skin hear the same way your ears hear. The company says one test subject was able to hear nine words through her skin.

Facebook wants to improve your reality by adding to it through the use of special glasses. The glasses are designed to show users things that are not physically present.

You could be sitting in your living room, looking at an empty table, then put on Facebook glasses and see a chess set on that table. You and a friend could play chess on that set using Facebook glasses, as if you were sitting across the table from each other. 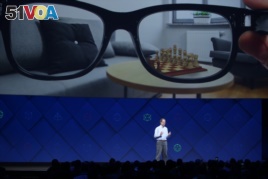 You could also control what your friends are seeing when you live stream video to them on Facebook Live. Add an image of a cup of coffee to your table. Make it steaming hot. Then, add a second cup so you do not look as if you are alone. 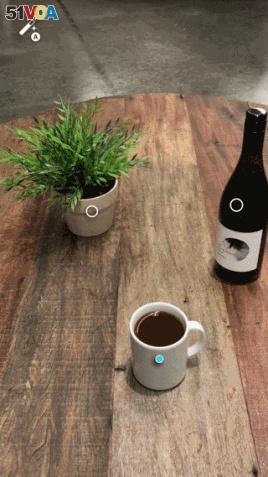 Facebook says you will be able to add frames, sports equipment, drawings and more to your videos and photos. It says you could even create your own frames to share.

Facebook Spaces is a new virtual reality tool designed to let users hang out with their friends around the world, as if they are together in the same place.

Spaces will use avatars people create from a photo of themselves on Facebook. These avatars will appear in Spaces so you can hang out with kind of a cartoon version of your friends.

You view Spaces through a virtual reality viewer and can invite others via Facebook Messenger. Spaces lets you visit with your friends in virtual places around the world.

A video shows how Spaces lets friends get together in virtual worlds.

implant - n. something placed in a person's body by means of surgery

scan - v. to look at the inside of (something) by using a special machine

convenience - n. something (such as a device) that makes you more comfortable or allows you to do things more easily

decode - v. to change signals for a radio, television, etc., to a form that can be heard or seen correctly

grandchild - n. a child of your son or daughter

glasses - n. a pair of glass or plastic lenses set into a frame and worn over the eyes to help a person see

chess set - n. a chess board and a set of chess pieces

live stream - v. transmit or receive live video and audio coverage of (an event) over the Internet

avatar - n. a small picture that represents a computer user in a game, on the Internet, etc.

cartoon - n. a design, drawing, or painting made by an artist of a model, often in a humorous way