Update Required To play the media you will need to either update your browser to a recent version or update your Flash plugin.
By Bryan Lynn
18 October 2021


Facebook says it plans to hire 10,000 workers in the European Union over the next five years to help build the "metaverse."

The metaverse has been described as a non-physical world in which individuals can communicate through different kinds of virtual technology.

The social media company announced its hiring plans for the EU in a statement published online. Facebook's hiring drive is expected to target Germany, France, Italy, Spain, Poland, the Netherlands and Ireland. 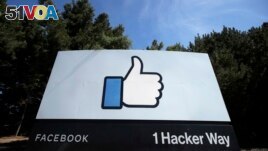 In the statement, the company said the metaverse will aim to create a greater sense of "virtual presence" for users. The idea is to build an online environment that will be much closer to the experience of interacting in person.

Facebook has already invested heavily in virtual reality (VR) and augmented reality (AR) technologies. Such technologies are expected to drive the metaverse. Company chief Mark Zuckerberg has said he plans to connect the social media service's nearly three billion users in new ways through these technologies.

Last month, Facebook announced a $50 million investment to finance worldwide research and partnerships to develop products for the metaverse. It said it plans to work on the effort with civil rights groups, non-profit organizations, governments and universities.

Facebook has also created a new team to develop metaverse products. But the company has said it will likely take 10 to 15 years to fully develop many of those products.

In the new statement, Facebook said "the need for highly specialized engineers is one of Facebook's most pressing priorities" in its metaverse development efforts. "We look forward to working with governments across the EU to find the right people and the right markets to take this forward, as part of an upcoming recruitment drive."

The statement recognized that many different parties would have to come together to build the metaverse. "No one company will own and operate the metaverse...Bringing this to life will take collaboration and cooperation across companies, developers, creators and policymakers."

The statement added: "This investment is a vote of confidence in the strength of the European tech industry."

Facebook has faced investigations in several EU nations into whether its operations limit competition. The company has also been criticized for not doing enough to protect the privacy and safety of its users and for failing to block hate speech from its services.

The Associated Press, Reuters and Facebook reported on this story. Bryan Lynn adapted the reports for VOA Learning English. Ashley Thompson was the editor.

interact – v. to talk and do things with other people

recruit – v. to try to persuade someone to work for a company or join an organization

collaborate – v. work together with other people on a single project

vote of confidence – n. a sign that someone is pleased with the quality of something or what someone else has done or produced