Finnish researchers say they have produced coffee in a laboratory that smells and tastes very similar to the real thing.

The team reports that lab-grown coffee could be important as climate change continues to threaten traditional coffee farming. 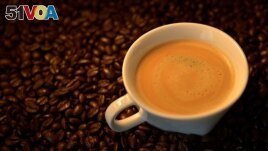 Scientists at Finland's VTT Technical Research Center created cell cultures from the leaves of coffee plants. The process involves floating the cell cultures in bioreactors filled with nutrients. The same method is used to make other kinds of animal- and plant-based products.

Heikki Aisala is a VTT researcher who oversaw the process. Aisala told Reuters news agency that cups of the cellular coffee probably would not pass taste tests comparing it to traditional coffee.

"Not like, of course, 100 percent. It tastes like a combination of different types of coffees," Aisala said. The researcher added that while the cellular coffee is not ready for the market just yet, "it certainly does resemble coffee at the moment."

Aisala added it is possible that the lab-grown version could one day develop into a multi-billion-dollar industry.

VTT Research team leader Heiko Rischer said cell cultures offer a more sustainable way to make coffee. This is because coffee is in high demand. This has led to countries opening up more land to grow coffee beans, which causes increased deforestation.

Rischer said the environmental benefits of lab-grown coffee include reduced use of pesticides and fertilizer and less need to ship coffee beans long distances to markets.

In Europe, lab-grown coffee would need to be approved before it could be marketed.

But an important question remains: Will coffee lovers actually drink the lab-grown creation? A Reuters reporter put that question to Satu, a server in a Helsinki coffee shop.

"I think someday we're going that way because of all the natural coffee sources vanishing," she said. "So, we have to move along...if it tastes good and the aroma is coffee based, so why not? I think it's possible."

culture – n. the process of growing things for scientific purposes

fertilizer – n. a natural of chemical substance that is put on land to help make plans grow well

aroma– n. a nice smell that usually comes from food or drink