Update Required To play the media you will need to either update your browser to a recent version or update your Flash plugin.
By Phil Dierking
11 February, 2018


Young Afghan women in the western province of Herat are breaking traditional barriers as their country's first female coders.

The women not only learned to code, but also created a video game.

They learned to code at Code to Inspire, or CTI, a girls-only computer programing school in Herat, the provincial capital. The game they created supports Afghanistan's effort to remove large opium poppy fields ruled by the Taliban. Opium is used to make heroin and other illegal drugs.

Coder Khatera Mohammadi said the product, "Fight Against Opium," is more than just a game. She said it is based on her brother's experience as a translator for American troops in the Helmand province.

"Each time he came back home, he would tell us about the poppy fields, the terrible mine blasts, battling opium traffickers and drugs," Mohammadi told The Associated Press.

She and her classmates at the center thought a computer game could bring attention to the issue, especially among the young. It could be their way to help in the fight against opium.

In the game, an Afghan soldier goes to Helmand to clear it of drugs. The soldier faces problems in the process: enemies hiding in tall corn fields, land mines, drug traffickers and hidden heroin laboratories. 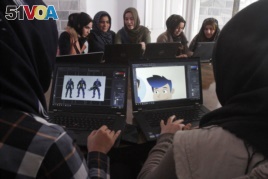 Afghanistan is the world's top grower of poppy, from which opium and heroin are produced. United Nations estimates show the country produces more opium than all other countries combined. Most poppy fields and drug production are in the southern provinces of Helmand and Kandahar.

The city of Herat is along an important path traffickers use in transporting drugs to neighboring Iran and beyond.

The Taliban and the Afghan government have been fighting each other since 2001. The Taliban is heavily involved in poppy production, which has increased in recent years.

Mohammadi and her teammates completed the game in one month. She said she showed it to her brother before anyone else. She has not identified her brother to media for the safety of her family.

Mohammadi said her dream is that one day the opium poppy would be replaced by the saffron crocus, a flower used to make spice. She included that in the game, by having the soldiers try to persuade local poppy farmers to grow saffron instead.

Saffron costs more, she said, "and it would be better for the country."

Fereshteh Forough created the Code to Inspire school. She was born an Afghan refugee in Iran. She returned to Herat after the Taliban lost control of the country in 2001. The former Herat University professor now lives in the United States. She wants to help girls learn to code as a way to change their lives.

The school houses over 80 girls, both high school and university students. They learn to create their own websites, apps, games and other web development projects.

Hasib Rassa is the CTI project manager. He said, "It's not easy for a girl to find a job and go to work outside of her home in Afghanistan. Now, with just one laptop at home, she can work online and earn money and help her family."

"The plan is to go big, to have more schools across Afghanistan," he added.

New female ideas in IT

"I wanted the world to see that Afghan girls can do something, and that we can have our own creations," she said.

For 18-year-old Samira Ansari, another CTI student, coding was at first very difficult. But now, it is a path to her dream of becoming a web designer. She hopes to study that subject after her two-year program at the center.

"When I first heard about coding, I laughed and wondered what it means," she said.

"But when I found out that all these creative and skilled people designing websites had started from coding, I became very interested," she said with a big smile.

This story was originally written by Ahmad Seir and Rahim Faiez for the Associated Press. Phil Dierking adapted their story for VOA Learning English. Caty Weaver was the editor.

How common is it for women to work in technology in your country? Why or why not? We want to hear from you. Write to us in the Comments Section or on 51VOA.COM.

code - v. to change (information) into a set of letters, numbers, or symbols that can be read by a computer

laptop - n. a small computer that is designed to be easily carried

opium poppy - n. a Eurasian poppy with ornamental white, red, pink, or purple flowers. Its immature capsules yield a latex from which opium is obtained.

sticker - n. a piece of paper with a picture or writing on it and a sticky substance on its back that is used to attach it to a surface

translator - n. a person who changes words written in one language into a different language