Update Required To play the media you will need to either update your browser to a recent version or update your Flash plugin.
By Mario Ritter
08 June, 2018


A group of students who survived the deadly shooting in Parkland, Florida, announced a bus tour to support new gun laws.

About 24 of the students from Marjory Stoneman Douglas High School made the announcement on Monday. The event came one day after several in the group graduated from high school.

The tour is to begin June 15 in the Midwestern city of Chicago. 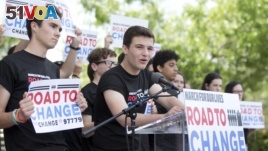 Cameron Kasky, center, speaks during a news conference, Monday, June 4, 2018, in Parkland, Florida, one day after graduating from high school. His group has announced a bus tour to "get young people educated, registered and motivated to vote." (AP Photo/Wilfredo Lee)

The students say their goal is to register more young people to vote so they will support reforms to U.S. gun laws.

Cameron Kasky is one of the high school students involved. He noted that four million young Americans will turn 18 years old in 2018. "If every single one of those people votes, encourages their friends to vote, makes sure their family is getting to the polls, we can make real change in this country," he said. Eighteen is the minimum age for voting in the United States.

The student organizers wore a message on T-shirts made for the event. The words "Road to Change" were printed on them.

The students said the tour will target districts where elected officials have received a lot of money from the National Rifle Association. The group, based in northern Virginia, represents gun owners and candidates who oppose restrictions on gun ownership.

The tour is the most recent event in a youth movement against gun violence. The movement developed after student Nikolas Cruz killed 17 people with a gun at Marjory Stoneman Douglas High School in Broward County, Florida on February 14.

In the months following the shooting, many students from the high school have taken part in demonstrations and gatherings. They have gone to Florida's capital, Tallahassee, and Washington, D.C.

On its website, the group says it will visit 20 states on its tour. They also say they will visit every congressional district in Florida.

The group says it is paying for its tour through donations. The related March for Our Lives campaign has received financial support from popular television and movie personalities such as Oprah Winfrey and George Clooney.

Megan Duzor reported this story for VOA News. Mario Ritter adapted it for VOA Learning English. Hai Do was the editor.

graduate –v. to receive a diploma from a school or college

encourage –v. to make someone more likely to do something

minimum –adj. the lowest amount or number that is possible