Update Required To play the media you will need to either update your browser to a recent version or update your Flash plugin.
By Bryan Lynn
08 August 2020


As the world faced months of restrictions on social gatherings and celebrations, the demand for champagne hit historic lows.

French producers of the pricey specialty wine estimate they have already lost $2 billion in sales this year. 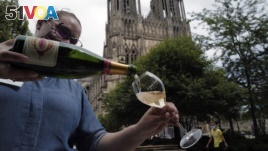 A waitress serves a glass of champagne at La Grande Georgette restaurant in front of the cathedral in Reims, the Champagne region, east of Paris, Tuesday, July 28, 2020. (AP Photo/Francois Mori)

Champagne is named for the eastern area of France where it comes from. The drink is traditionally served at celebratory events or enjoyed at parties or while eating out.

Thibaut Le Mailloux is a member of the Champagne Committee, a group representing about 16,000 champagne producers. "We are experiencing a crisis that we evaluate to be even worse than the Great Depression" of 1929, he told The Associated Press.

The group said it expects about 100 million bottles of champagne to be left unsold by the end of the year.

In an effort to reduce the surplus, the committee has launched emergency production limits. Like oil-producing nations, the committee sets rules for the size of each year's harvest. This aims to prevent too much production and large price drops.

The committee is expected to set a strict limit at a meeting scheduled for August 18. The limit will likely lead to record supplies of grapes being destroyed or sold off at greatly reduced prices. The expected limit could especially be difficult for smaller producers to deal with.

"We are to destroy (the grapes) and we pay for them to be destroyed," said Anselme Selosse, of Jacques Selosse Champagnes.

Selosse told The Associated Press he also sees it as "an insult to nature" that the area's famous grapes might even be used to produce alcohol for hand sanitizer. Such production happened in other wine-producing areas after demand for sanitizer has risen during the virus crisis.

Paul-Francois Vranken, founder of producer Vranken-Pommery Monopole, called the current situation "a catastrophe." He noted that the champagne business had "lived through every single war." But with past crises, "there was a way out." Now, Vranken sees no way out "unless we find a vaccine."

Major producers such as Vranken-Pommery predict the crisis could last for years.

Vranken says he thinks there needs to be a change in how companies market champagne to succeed in the new normal. A drop in celebrations and group events moving forward will lead to continued reductions in champagne sales.

Vranken said marketing campaigns should center more on champagne's quality as a naturally, often organically produced drink from a historic area of France. "Even if the bars and the nightclubs are closed for five years, we don't plan on missing out on customers," he added.

Selosse, who produces many "natural" champagnes with no added sugar, also hopes the coronavirus crisis will lead to changes in marketing. He is also calling for more cooperative efforts in production, such as "communal wine presses" to help smaller producers share costs.

The Associate Press reported this story. Bryan Lynn adapted the report for VOA Learning English. Hai Do was the editor.

evaluate – v. to consider or study something carefully

organic – adj. grown from the earth and not using artificial chemicals

customer – n. a buyer of goods or services