From Outside, Ethiopia’s Disapora Pushes for Change

Update Required To play the media you will need to either update your browser to a recent version or update your Flash plugin.
By Alice Bryant
08 August 2020


With more than 2.5 million Ethiopians living outside of Ethiopia, the diaspora is not only large, but powerful.

The Oromo are Ethiopia's biggest ethnic group. In 2015, members of the Oromo demonstrated in a small town about 80 kilometers from Ethiopia's capital, Addis Ababa. They were protesting a development plan that aimed to expand the capital city into nearby Oromo towns and villages.

The diaspora supported the protesters through social media activism and satellite television. The anti-government protests came before the resignation of then-Prime Minister Hailemariam Desalegn in 2018. 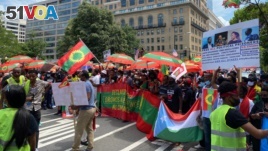 Members of the Oromo Ethiopian community in the US demonstrate in Washington, on July 17, 2020, in support the Oromo minority in Ethiopia.

Awol Allo is a top lecturer at Britain's Keele University. He regularly writes on Twitter about political and Oromo developments. He does not think of himself as an activist. Allo says the diaspora's activity and influence depend on how the Ethiopian government reacts to free expression.

When the new government came to power in 2018, the activism and influence of the diaspora lessened, he told VOA, because people in Ethiopia were able to express their views.

Prime Minister Abiy Ahmed, who is Oromo, took office in April of 2018.

Conflict in Ethiopia began again in late June after the killing of Hachalu Hundessa, a popular Oromo singer and activist. Protests, some violent, followed his death. Police arrested opposition politicians.

Endalk Chala is co-founder of the blogging group Zone9. He is also an assistant professor at Hamline University in the American state of Minnesota. Chala says the diaspora's powerful influence results from a lack of independent media in Ethiopia.

"There are two diaspora media outlets, Ethiopian Satellite TV and Oromo Media Network," he explained. Both had been giving detailed coverage of the protest. And people in Ethiopia did not have any other choices, he said, "because there was no media, opposition media or independent media for that matter in the country." So people could only choose from the two outlets.

In the beginning, the current government's national unity plan had popular support. And many exiled opposition activists and politicians returned to the country. In 2018, the government invited Ethiopian Satellite TV and Oromo Media Network to operate from Ethiopia.

Many other Ethiopians also returned in hopes of supporting the changes.

Ermias Kebede organizes events for young people in his community in London. He moved back to Ethiopia in 2019. But, he says, he soon realized not everyone there welcomes the activism of the diaspora.

He heard much criticism about the diaspora from coworkers and family members. "People saw the diaspora as more of agitators," he says, but agitators who do not understand the effects of their actions.

In addition to using political pressure, Ethiopians living outside the country are an economic force. They send billions of dollars home to family in Ethiopia each year. After Nigerians, Ethiopians are the second-largest African immigrant group in the United States.

diaspora - n. a group of people who live outside the area in which they had lived for a long time or in which their ancestors lived

lecturer - n. someone who teaches at a college or university on a temporary basis

blog - n. a website on which someone writes about personal opinions, activities, and experiences (gerund: blogging)

agitator - n. a person who tries to get people angry or upset so that they will support an effort to change a government, company or something else