Gay Marriage Up 70% in US Since Legalization

Update Required To play the media you will need to either update your browser to a recent version or update your Flash plugin.
By Caty Weaver
24 September 2020


Same-sex marriages now make up a half a million American households, five years after the Supreme Court legalized such relationships.

The U.S. Census Bureau reported last week that the number of married same-sex households has increased by almost 70 percent since 2014. The numbers are based on the Census Bureau's American Community Survey.

The survey found that about 980,000 households in the country belong to same-sex couples. It showed 58 percent, or a little more than 586,000, as married. The other 42 percent lived together outside of marriage. 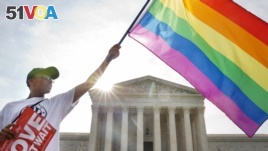 Carlos McKnight of Washington, waves a flag in support of gay marriage outside of the Supreme Court in Washington, D.C., June 26, 2015. (AP)

Separate survey results also released Thursday show that almost 15 percent of same-sex couples had at least one child under the age of 18. The same is true of a little more than 48 percent of opposite-sex couples.

Of the nearly 300,000 children living in homes with same-sex couples, 66 percent were children of both partners, compared to 95 percent for opposite-sex couples, reports the Census Bureau's Current Population Survey.

The District of Columbia had the greatest concentration of same-sex households. In the nation's capital, about 2.4 percent of households are same-sex households. The nearby state of Delaware followed, with 1.3 percent. The states of Oregon, Massachusetts and Washington came next, all a little over one percent, the survey found.

In the survey, more than 16 percent of same-sex married households were interracial couples, double the rate for opposite-sex married couples.

The U.S. had 122 million households in 2019. The number of gay and lesbian couples in the country is greater than 980,000 since that number only represented same-sex households.

The 2019 American Community Survey for the first time included updated relationship identifications that better captured the number and qualities of same-sex households in the United States.

demographer – n. someone who studies changes, such as the number of births, deaths, marriages, and illnesses, that occur over a period of time in human populations

heterosexual – adj. sexually attracted to people of the opposite sex

concentration – n. a large amount of something in one place