Update Required To play the media you will need to either update your browser to a recent version or update your Flash plugin.
By VOA
06 March, 2018

The eastern United States is recovering from a major storm, which left widespread damage.

Strong gusts of wind broke windows and removed tops of buildings. Hundreds of thousands of people lost power for one or more days. Huge trees came crashing down.

And, reports say one of the trees brought down by the storm may have been planted by the first U.S. president, George Washington. 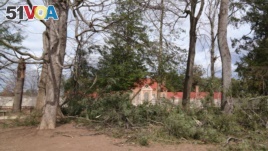 The tree stood on the grounds of Washington's home at Mount Vernon, about 30 kilometers south of Washington, D.C. The huge estate sits along the Potomac River, just south of Alexandria, Virginia.

Today, George Washington's Mount Vernon is a popular stop for travelers, both Americans and visitors from overseas.

The tree, a Canadian hemlock, was planted near the entrance to a garden on the property. It had a sign that read "circa 1791" on it -- the year that people thought it was planted.

Rob Shenk works for George Washington's Mount Vernon. He published a photograph of the damaged tree on Twitter last weekend. He wrote, "The DC area lost a lot of trees yesterday, but maybe none more significant than this 1791 Canadian Hemlock at Mount Vernon. George Washington himself likely knew this tree..."

Dean Norton is the director of horticulture at George Washington's Mount Vernon. In a video published on social media this week, he talked about the history of the fallen hemlock.

Washington, Norton said, was interested in planting hemlock trees on his property. Hemlocks did not grow in this part of Virginia.

By July of 1785, Washington got his wish. He received two hemlocks planted in cut whiskey barrels.

General Benjamin Lincoln of Massachusetts sent the trees to the future president as a gift from Clinton.

Mount Vernon experts say Washington wrote down that he planted the trees on the grounds of Mount Vernon on July 13, 1785.

Neither Shenk nor Norton can be sure that Washington planted the tree with his own hands. However, Shenk told The Washington Post newspaper that he at least directed the planting.

But last week, 100-kilometer-per-hour winds twisted, shook and took down the over two-century-old hemlock.

"You hate to see it, but it happens," Norton said in the video. He described the fallen hemlock as a "living witness to the life and times of George Washington."

Mount Vernon officials say that they have collected the wood from the tree. It will be used at Mount Vernon for preservation efforts and special projects.

estate - n. a large piece of land with a large house on it

horticulture - n. the science of growing fruits, vegetables, and flowers

whiskey - n. a strong alcoholic drink made from a grain (such as rye, corn, or barley)

barrel - n. a round usually wooden container with curved sides and flat ends

preservation - n. the act of keeping something in its original state or in good condition