Update Required To play the media you will need to either update your browser to a recent version or update your Flash plugin.
By Susan Shand
05 May, 2019


Scientists in Germany say they have used new technology to create see-through human organs. They say the technology could lead to production of three-dimensional (3D) body parts for use in transplant operations.

The scientists are with Ludwig Maximilians University in Munich. They said they developed a process that uses a solvent to make transparent organs, such as the brain and kidneys.

The German researchers use lasers in a microscope to scan the organ to be replaced. The laser light helps them see the blood vessels and every single cell inside. 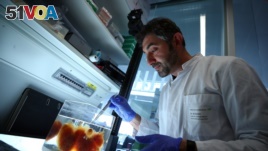 Dr. Ali Ertuerk, Group Leader at the Institute for Stroke and Dementia Research (ISD) at the Ludwig Maximillian's University, looks at a transparent human brain at his laboratory in Munich, Germany April 23, 2019. (REUTERS/Michael Dalder)

The researchers use this information to print out the structure of the whole organ. For this, they need special equipment. They use a 3D printer to manufacture the structure – one that has height, width and length.

The researchers then load the printer with stem cells, which can become any kind of cell in the body. The stem cells act as "ink" in the printer. They are injected into the correct position, making the organ fully operational.

The leader of the study, Ali Erturk, described the new technology as a major development for 3D printing in the medical field.

Until now 3D-printed organs lacked detailed cellular structures because they were based on two kinds of medical scanning technology, he explained. The two are computed tomography (CT) scans and magnetic resonance imaging.

"We can see where every single cell is... we can actually replicate it exactly the same," Erturk said. "I believe we are much closer to a real human organ for the first time now," he added.

Erturk and his team plan to start by creating a transparent, bioprinted pancreas over the next two to three years. They hope to develop a human kidney within 5-6 years.

The researchers will first test to see if animals can live with bioprinted organs and could start tests within five to 10 years, he predicted.

The Reuters News Agency reported this story. Susan Shand adapted it for Learning English. The editor was George Grow.

transplant - v. to perform a medical operation in which an organ or other part that has been removed from the body of one person is put into the body of another person

transparent – adj. something one can see through completely

solvent – n. a liquid used for breaking down other substances

scan – v. to look at the inside of (something) by using a special machine

replicate – v. to recreate something exactly