Update Required To play the media you will need to either update your browser to a recent version or update your Flash plugin.
By Susan Shand
11 February, 2018


"Put on a thick jacket," the 18-year-old son of Albanian immigrants told the 12-year-old German-Iraqi boy over the Internet.

The young man was explaining how to bomb a Christmas market last year in the Rhineland town of Ludwigshafen. He told the boy to hide, light the explosive device and run.

Luckily, the bomb failed to explode. Police arrested the 12-year-old in December 2017. They say it was the second time he tried to carry out a bomb attack.

The step-by-step guidance by the 18-year-old was described in court papers last month. He communicated online with the boy from his home in Austria.

Now, a top German official is calling for cancellation of laws restricting security surveillance of children under the age of 14. Hans-Georg Maassen is the head of the country's domestic intelligence agency. He argues that Germany is facing serious risks from what the media calls "kindergarten jihadists."

The intelligence chief told a reporter that the Islamic State (IS) group and its followers target children in Germany. He added that IS agents search the internet for children who can be reached and try to persuade them to carry out terrorist attacks.

Maassen said he was worried about the risks from women and children who once lived in areas controlled by the militant group. He described the children of jihadist parents as "ticking...bombs."

"We see that children who grew up with Islamic State were brainwashed in the schools and the kindergartens of the Islamic State," Maasen said. He noted that some boys and girls heard IS teachings at an early age, learned to fight, and may have abused or even killed prisoners.

Only a few of the 290 children who left Germany with jihadist parents — or who were born in Syria or Iraq — have returned to Germany. Some rights activists have warned that Germany should not quickly change civil rights protections, questioning whether the danger is being overstated. 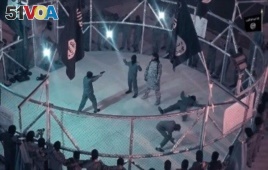 The threat from children exposed to militancy has become a major political issue in Germany. Three out of five Islamist attacks in the country in 2016 were carried out by youngsters.

This is the second time Maassen has publicly expressed his concerns about children working for militants. He also said it in October when he told Germans to "take a serious look at the threat" and to call the police if they saw anything.

Last year, experts warned that Western governments were not giving enough thought about what to do with the children raised under IS rule or of Syrian and Iraqi children enlisted by militants.

IS leaders were clear about their plan to teach children to be "the generation that will conquer Baghdad, Jerusalem, Mecca and Rome." As the group's territory shrank, the militants released videos explaining what would happen to their enemies in the future.

German officials aren't the only ones worried about the children of IS foreign fighters or the continuing efforts by the group to get new members.

Last week, the head of London police's anti-terrorism command, Dean Haydon, warned of children taught by Islamic State coming back to Britain to carry out attacks.

"Some terror groups are training children to commit atrocities," Haydon said. "We need to not just understand the risk the mother poses but the risk that any child poses as well," he told a London newspaper.

Last month, a 27-year-old British woman returning from Syria was arrested at Heathrow airport under terrorism laws. She had a two-year-old with her.

Haydon said that police are testing children who have been brought to Britain by ‘jihadist' parents after being born in Syria or Iraq to be sure they are really British.

"If a mother turns up with a stateless child, born in Syria, we need to be satisfied that that child actually belongs to that mother," Haydon said. He added that some returnees have brought children that were not really theirs.

Experts say jihadi children can be reformed, and their thinking changed. But the experts warn they are battling a belief among Western officials that these children are different than child soldiers from other conflicts.

Canadian researcher Mia Bloom is writing a book about jihadist child soldiers. Last year, she told VOA last year that jihadi children can be rehabilitated. She pointed to a program in Pakistan that has proved highly successful.

Jamie Dettmer reported this story for VOANews. Susan Shand adapted his report for Learning English. George Grow was the editor.

jihadist – n. one who engages in a struggle or fight against the enemies of Islam

rehabilitated – v. to bring (someone or something) back to a normal, healthy condition after an illness, injury, drug problem,