Update Required To play the media you will need to either update your browser to a recent version or update your Flash plugin.
By Bryan Lynn
06 May, 2018


Thousands of German students are accusing school officials of creating an English exam that was "unfairly" difficult.

The exam is important because it is part of Germany's Abitur system. The Abitur test is given to students who are completing high school and preparing to enter college.

More than 35,000 people have signed a petition to voice their concerns about the test which was recently held in the state of Baden-Württemberg.

The students say the English part of the 2018 Abitur was clearly more difficult than tests given in recent years. They are calling on school officials to consider their criticisms while judging student performance and giving test results. School officials have defended the test. The said the questions were "appropriate" for the students. 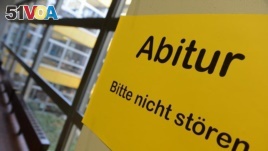 A sign at a German school announces the Abitur exam taken by German students at the end of their high school years. (Change.org)

The exam is designed to test a student's understanding and skill level in English. Part of the test requires students to read examples of English writing and then answer questions to measure how much they comprehend.

The petition says some of the English examples were very difficult to understand, even for students who usually perform well in English classes. It said some examples were written a long time ago and contained old words.

The petition also noted that "metaphorical" language was a problem.

One of the most criticized examples was a description of New York City's Statue of Liberty.

This is part of the example on the test--it contains many words not usually used in VOA Learning English.

"Against the luminous sky the rays of her halo were spikes of darkness roweling the air; shadow flattened the torch she bore to a black cross against flawless light—the blackened hilt of a broken sword. Liberty."

The students were required to answer questions about that example.

The petition says such language should not have been used to measure reading and comprehension. Students said it contains too many "unknown words" and "symbolic meanings," making it difficult to understand and analyze.

Even some native English speakers pointed out on social media that they too would have difficulties with the writing in the example. One of those was a British Twitter user living in Frankfurt, Germany.

"I'm a native English speaker and ‘roweling' is a new word to me, too. I'm pretty sure you can get by without it," the user tweeted.

The petition noted another English example from the 1934 book "Call It Sleep" by Henry Roth. The students said many of the words used in the example are so outdated that some modern dictionaries do not even include them.

The petition said some examples dealt with character development. The students said this meant the comprehension questions required them to "interpret feelings and relationships."

They said this meant the right answers were not necessarily provable and required a lot of time to try to "read between the lines."

The BBC reported that the English exam also asked the students to compare two cartoons. They both dealt with the issue of Britain leaving the European Union, or Brexit.

One image was called "Project Fantasy," the other "The Realities." The cartoons required some current affairs knowledge and also English skills, BBC noted.

For all of these reasons, the petitioners declared, "The Abitur 2018 in Subject English was unfair!"

The local official in charge of the testing process in Baden-Württemberg is the area's minister of culture, Susanne Eisenmann.

In a statement, she said officials had carried out a full review of the exam and decided it was "appropriate" for the students being tested. She said the review included experts in charge of graduation requirements and outside English experts.

Eisenmann said she does not think the students should worry too much about their exam results. "I have full confidence in the teachers that they will use their discretion to make responsible and balanced corrections," she said.

Bryan Lynn wrote this story for VOA Learning English, based on reports from the BBC and other news sources. Mario Ritter was the editor.

appropriate – adj. suitable or right for a particular situation or person

comprehend – v. to understand the meaning of

metaphorical – adj. an idea that is used as a symbol for something else

analyze – v. to study something closely and carefully

character – n. a person included in a story

cartoon – n. a picture that looks at people or objects in a funny way

assess – v. make a judgement about something

review – n. the act of carefully looking at or examining something

confidence – n. feeling of being certain of your ability to do something well

discretion – n. right to choose what should be done in a particular situation