Update Required To play the media you will need to either update your browser to a recent version or update your Flash plugin.
By Bryan Lynn
21 September 2020


The death of a United States Supreme Court justice has set off a new political battle just six weeks before the nation's presidential election.

Over the weekend, crowds gathered near the Supreme Court building to remember the life of Ginsburg, who served over 27 years on the high court.

Some people brought flowers and pictures of the justice. One group performed the Christian hymn "Amazing Grace." Ginsburg was the first Jewish woman on the court. One sign read, "Today we mourn, tomorrow we fight." 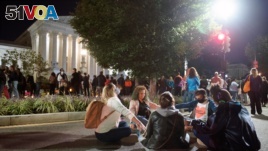 Ginsburg was best known for her defense of the rights of women and minorities. She spent her final years on the Supreme Court as the unquestioned leader of its liberal wing.

After her death was reported, praise of Ginsburg appeared to come from all political sides, including the White House.

In a statement, President Donald Trump said, "Her opinions, including well-known decisions regarding the legal equality of women and the disabled, have inspired all Americans, and generations of great legal minds."

His statement noted that Ginsburg had "demonstrated that one can disagree without being disagreeable."

Supreme Court justices are nominated by the president and confirmed by the Senate. Some U.S. politicians were quick to express their opinion about moving forward with filling her seat on the high court.

Top Republican Party lawmakers are pressing for action on Ginsburg's replacement before the November 3 election. Democratic Party supporters want to delay the action until after the election, hoping their presidential candidate, Joe Biden, will win.

Trump, the Republican nominee, said on Monday he is considering a short list of candidates to replace Ginsburg. The president reportedly plans to announce his choice on Friday or Saturday.

It will be Trump's third nominee to the Supreme Court since taking office in 2017. Ginsburg's death gives him the chance to shape a conservative majority that will likely influence the court's decisions for years to come.

Trump rejected calls that the Republican-controlled Senate should wait to vote on a nominee until after the election. "The final vote should be taken before the election. We have plenty of time for that," he said.

Trump has suggested he will nominate a woman and confirmed the names of two possibilities: Judge Amy Coney Barrett and Judge Barbara Lagoa. Barrett serves on the Chicago-based 7th U.S. Circuit Court of Appeals, while Lagoa is a federal district judge from Florida. Both are said to have taken right-leaning positions in court rulings.

Trump noted that Lagoa is a Hispanic-American from the politically important state of Florida. Lagoa, a Cuban-American, is "excellent, she's Hispanic, she's a terrific woman," Trump said. "We love Florida."

As the battle over the replacement process began, Reuters news agency noted a sharp rise in political donations from Democratic Party supporters. More than $90 million flowed from the donors in just over 24 hours, Reuters reported.

On the Republican side, Iowa Senator Joni Ernst's re-election campaign sent out an email shortly after Ginsburg's death was announced. "BREAKING: The future of the Supreme Court is on the line," the email read.

At a Trump campaign event in North Carolina, supporters shouted "fill that seat" when the president raised the issue of the open court seat. Speaking at the event Saturday, Paulette Fittshur told The Associated Press she believes Ginsburg's death "was God's perfect timing in this election." She called it "a golden opportunity for conservatives."

But another Trump supporter, Chris Holmes, said a nomination fight is not what the country needs or what Republicans should take on before the presidential election.

Holmes, a 58-year old engineer, also attended the North Carolina campaign event. Holmes said he was worried about what might happen after November 3 if the result is disputed or unclear: "Violence is coming," he warned.

Bryan Lynn wrote this story for VOA Learning English, based on reports from The Associated Press, Reuters, Agence France-Presse and the White House. George Grow was the editor.

hymn – n. a song sung by Christians to praise God

wing – n. a group of people in an organization or political party who have the same beliefs

raw – adj. in the natural state

lean – v. a tendency to prefer or agree with a particular set of beliefs