Update Required To play the media you will need to either update your browser to a recent version or update your Flash plugin.
By Bryan Lynn
05 October, 2016


Google has announced its first smartphone designed in-house, the Pixel.

The company showed the new phone to the world during a launch event Tuesday in San Francisco, California.

"So today, I'm very excited to introduce you to a new phone made by Google, we call it Pixel."

That was Rick Osterloh, head of Google's newly-formed hardware group.

Google's Android operating system already runs millions of phones worldwide. In the past, the company has sold phones and tablets under the Nexus name.

But the Pixel smartphone marks a change by Google to design and build its own devices, rather than just supplying software to other manufacturers.

In addition to the smartphone, the company also launched several other high-tech devices designed to compete with main rivals Apple and Amazon.

One of the main features of Pixel is that it includes the company's latest artificial intelligence service, called Google Assistant. Users can talk directly to Google Assistant to ask questions, get information or even to perform tasks. 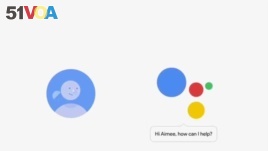 Users can talk directly to the Google Assistant service to ask questions, get information or even to perform tasks. (Google)

"Just like we built a Google for everyone, we want to build each user his or her own individual Google."

Pichai called Pixel the "first phone made by Google, inside and out." Taiwan-based HTC manufactures the phone but Google says it completely designed and built Pixel.

Here are some of the main features of the new Pixel smartphones.

The prices are comparable to Apple's iPhone and Samsung's Galaxy models.

The phones have an aluminum body and glass case, sold in three colors – Quite Black, Very Silver and Really Blue. 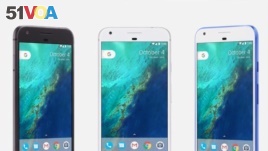 Pixel has a 12.3 megapixel camera that the company calls the "best smartphone camera" ever made. Google cited a review from DXOMark, which gave Pixel a rating of 89 out of 100. This is better than the 86 score given the iPhone 7, and the 88 rating for the Samsung Galaxy S7 Edge.

The company said camera speed is also faster, permitting users to take photos without delay. A demonstration showed a user recording video as they walked down a street. The video suggested that the phone's new video stabilization technology records images smoothly. 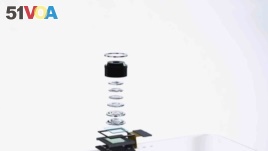 Google's Pixel smartphone has a 12.3 megapixel camera the company calls the "best smartphone camera" ever made. (Google)

Google says Pixel can get users through the day with one charge. It also says the battery can charge for seven hours of use in just 15 minutes.

Software upgrades are easier with Pixel because when a new update is available, it is automatically downloaded and installed. The next time the phone is turned on, the update is complete. 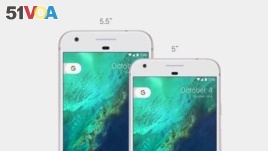 The phone comes in two sizes, 12.7 centimeters, or 14 centimeters. The price of the smaller phone starts at $649. (Google)

Google offers a service built into the Pixel phones that lets users talk with helpers at any time to solve problems. The phones have a screen sharing option, so the helper can see exactly what the user is seeing.

A highlight of the launch event came when the company's vice president of product management, Brian Rakowski, showed off some of the Google Assistant's human-like actions.

The Pixel phones are already being sold in the GoogleStore, and will be distributed through mobile carriers throughout the world.

Bryan Lynn wrote this story for VOA Learning English, based on the Google launch event, as well as reports from VOANews and the Associated Press. Caty Weaver was the editor.

introduce – v. to make someone or something known for the first time

hardware – n. the machine or equipment parts of a computer

upgrade – v. improve something to a better or newer model

cloud system – n. a way to store and regularly access computer data on multiple servers through the internet