Update Required To play the media you will need to either update your browser to a recent version or update your Flash plugin.
By Bryan Lynn
10 October, 2018


Google has launched the latest versions of its Pixel smartphone, as well as a new tablet computer and a smart home controller.

The new products were announced during an event Tuesday in New York.

Google launched the first Pixel smartphone two years ago as part of a major new effort to develop hardware. The company is better known for building software to power internet search technology and the Android smartphone operating system.

Over the past two years, Google has sold about 7 million Pixel phones, the technology research company IDC estimates. Those sales are a very small part of the estimated 3.6 billion phones sold by all manufacturers during that same two-year period. Apple, for example, sold about 388 million iPhones during the two years.

Both new Pixels are also being released in 12 other countries, including Japan, Singapore and India.

During Tuesday's launch event, Google officials demonstrated new features and improvements to the Pixel 3. At times, they made direct comparisons to iPhones.

Google promises better camera performance in its Pixel 3 devices. A new tool is designed to use machine learning software to produce better low-light and close-up shots. The tool works by combining many shots quickly taken one after the other. The camera also uses machine learning to examine the many photos it takes in an effort to find and suggest the best ones. 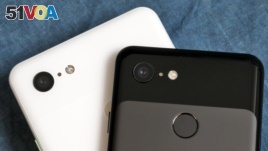 The cameras on the back of the Google Pixel 3 XL, left, and Google Pixel 3 smartphones are shown in this photo, in New York, Wednesday, Oct. 10, 2018. (AP Photo/Richard Drew)

Pixel 3 phones were also built with two camera lenses in front, which Google demonstrated as a helpful tool when taking selfies with large groups.

The phone is also able to answer itself if the user cannot or does not want to pick up. If a call comes in, the user can touch the screen to have the phone answer and ask who is calling. The answer from the person placing the call is then put into a text message and shared with the user in real time.

"You can decide whether to pick up, send a quick reply, or mark the call spam. You'll never have to talk to another telemarketer."

As with the earlier models, the new Pixels center heavily on the company's search engine and other products. These include maps, Google Assistant and YouTube video service.

Google also introduced its new Home Hub, an internet-connected smart speaker and home controller with a small screen. The device is similar to Amazon's Echo Show and Facebook's new Portal.

The company said Home Hub is designed to be a central controller for many devices throughout the home, such as lights, outdoor cameras, temperature controls and televisions. Like similar devices, it can be activated by voice to play music and look up information on the internet.

Home Hub will cost $149 when it goes on sale later this month in the United States, Britain and Australia. This compares to the new version of Amazon's Echo Show, which sells for $229. The cost of the Facebook Portal starts at $199.

Google also announced it would launch a new computer tablet later this year called the Pixel Slate. The company says the device will be powered by its own newly designed Chrome OS system. It appears aimed at competing with Apple's iPad Pro.

The Slate will run Android phone apps, but Google says it offers performance closer to a desktop computer. It is priced at $599. An exact release date has not yet been announced.

tablet – n. a small computing device that is controlled by touching the screen or by using a special pen

software – n. the instructions that control what a computer does

hardware – n. machines or equipment used inside computers or together with electronic devices

telemarketer – n. a person or company that sells a product or service by phone