Update Required To play the media you will need to either update your browser to a recent version or update your Flash plugin.
By VOA
05 September 2020


Chase Gaines wishes he could get more young people in North Carolina to open their doors when he stops at their houses. He wants to give them information from the Republican Party.

Rick Hart desires for the days where he could campaign in the streets of Atlanta, Georgia. He wants to persuade young people to elect Democratic Party candidates.

The two college students are on the opposite sides of American politics. But they face the same difficulty: reaching young voters when universities are empty because of the new coronavirus.

Hart is a student at Morehouse College in Atlanta. He spoke to the Associated Press from his parent's house in Laurel, Maryland. "The country kind of came to a shut down and we were like, ‘What do we do next?'" he said.

Campaigns and their supporters say they are still struggling to answer that question and looking for solutions.

The coronavirus has forced many colleges to operate online-only classes, ending hopes of large voter registration drives on school campuses. Festivals, sporting events or other large public gatherings where young adults can be found are also canceled.

But registering college students to vote is just half the battle.

American states set their own election processes and have different policies for in-person and mail-in voting.

Students who register to vote using a university address might have their college housing close from coronavirus before they are able to vote. The move to voting by mail raises other unexpected difficulties for young voters. These include a lack of knowledge about the mail-in voting process and ballot rejections because of unclear handwriting.

"Younger voters are behind the eight ball to begin with, and COVID is just going to make it worse," said Daniel Smith. He is a political science professor at the University of Florida who has studied mail-in balloting. 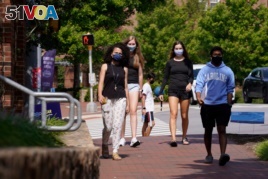 Students wear masks on campus at the University of North Carolina in Chapel Hill, N.C., Tuesday, Aug. 18, 2020. The university announced that it would cancel all in-person undergraduate learning starting on Wednesday following a cluster of COVID-19

The closing of campuses has a strong effect on registration of young voters in the important state of North Carolina. President Trump, a Republican, won the state in 2016. Democratic Party nominee and former Vice President Joe Biden is hoping to win the state in the presidential election on November 3.

Kate Fellman leads the nonpartisan voter registration group You Can Vote. She said the organization set a goal this year to register 30,000 people, aged 18 to 25, in North Carolina. She said it had registered 4,391 new voters before COVID-19 hit in mid-March. In the four months since, the group registered fewer than 100.

The problem has led to creative methods for registering young voters.

Tom Steyer, a businessman and former 2020 Democratic presidential candidate, created the group NextGen America in 2013. It has voter registration operations in 11 states. The group says it uses social media, email, online advertising and direct messaging to connect with young people.

The Democratic National Committee and Biden's campaign have greatly restricted employee travel, effectively ending their in-person voter contacts. That is to change said Symone Sanders, a top campaign advisor for Biden. She said the campaign will have its employees working campus voting drives in more than 10 battleground states by September.

Republican campaigns have been more willing to reach out to voters in person. Trump campaign spokeswoman Samantha Zager said the campaign has 73 target campuses. And, she added, more than 550 students are helping the campaign both on campus and online.

"Our youth engagement efforts will continue both virtually and in-person," she said.

The Center for Information & Research on Civic Learning and Engagement at Tufts University collects information on young voter registration. Of the 39 states for which it had dependable information, the center found that 20 states already have a higher number of young people registered to vote in August 2020 than they did in November 2016.

The center noted that voter registration among 18 and 19-year-olds in 30 out of 39 states is currently at levels below those of 2016. And in eight of those states the drop was sharp, at 33 percent less.

The Associated Press reported this story. Hai Do adapted the story for Learning English. Caty Weaver was the editor.

campus - n. the area and buildings around a university, college, school

behind the eight ball - phrase, at a disadvantage

nonpartisan - adj. not supporting one political party or group over another

engagement - n. the act or state of being involved with something

virtually - adv. occurring on computer or the internet