Guidance for Masks in Schools Differs Widely Across US

Update Required To play the media you will need to either update your browser to a recent version or update your Flash plugin.
By Pete Musto
28 July 2020


School districts in the United States that plan to reopen in the autumn are struggling with whether to require teachers and students to wear face coverings.

The issue has divided schools in both cities and rural areas, resulting in widely different safety guidelines.

The divide has been influenced by politics in some areas, such as the Midwestern state of Iowa. Democratic-leaning cities like Des Moines and Iowa City have required face masks to limit the spread of the coronavirus. But smaller, more conservative communities have left the decision to parents.

Mike McGrory heads the Ottumwa school district in Iowa's southeast corner, with 4,700 students. He told the Associated Press: "You have to be very sensitive and realize there are lots of perspectives."

McGrory said it would have been easier if state health officials had issued exact rules. But when that did not happen, the district decided to back the state Education Department's guidance not to require masks.

Many states are calling for teachers to wear masks, including Alaska, Connecticut, California, Maine, Massachusetts, New Jersey, New York, Nevada, Ohio, Utah and Washington. Some will require masks for students. Many other states are leaving the decision to local officials.

Rob Murphy is a doctor and infectious disease expert at Northwestern University in Chicago. He said from a medical perspective, it should be an easy choice: Wear a mask in school.

Schools should take other steps, too, including reducing class sizes, limiting contact sports and testing students and teachers before they enter school buildings, Murphy said. But he added that a first and necessary step should be a mask requirement. Murphy called the current lack of direction a "no plan plan."

"It's all over the place," Murphy said. "There's nobody at the wheel." 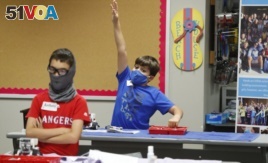 In this July 14, 2020, file photo, amid concerns of the spread of COVID-19, Aiden Trabucco, right, wears a mask as he raises his hand to answer a question behind Anthony Gonzales during a summer STEM camp at Wylie High School in Wylie, Texas.

Even among health experts, there are disagreements. Many districts point to a recommendation by the American Academy of Pediatrics. The organization suggests that school officials urge the use of face coverings, without making it a requirement. The group said its recommendation is based on the need for students to return to school and the fact that coverings can affect learning for some children.

The U.S. Centers for Disease Control and Prevention has recommended that students and teachers wear masks whenever possible.

Other countries where schools have reopened have not required all students to wear face coverings.

In France, public schools reopened briefly before a summer break, with no sign of widespread virus spread. Face coverings were only required for older students, but students stayed in the same classroom all day.

In Norway, preschools reopened first, followed by others. Children were put in smaller groups that stayed together all day. Face coverings were not required.

Iowa's largely rural Western Dubuque Community School District will let students and their parents choose. Superintendent Rick Colpitts has heard the arguments for face coverings, but he also hears from people who are opposed.

"It's a lose-lose situation," Colpitts said. "We tried to take the political piece out of it, but there's no way to make everyone happy."

Iowa is among many states that have left the face covering decision to local school officials. The state's Education Department's recommendation against a mask requirement was based on the idea that a requirement would lead to many more questions. This includes questions about what face coverings are acceptable, how the rules would be enforced and what exceptions could be made.

"There are just so many things that go into it," Iowa Gov. Kim Reynolds, a Republican, said in explaining why she opposes a school mask requirement. "If somebody wears the same mask for seven days without ... washing it or changing it out, is it actually doing what it's supposed to be doing? Who's going to monitor that?"

To Lily Eskelsen Garcia, president of the National Education Association, the lack of mask requirements and other safety rules will create serious problems.

Claire Hanson teaches in North Liberty, Iowa. She agrees with concerns that face coverings would be hard for young children but thinks it is still the best choice.

"Do you understand how resilient children are? It's not a mask of terror. They will get through it," Hanson said.

In Connecticut, officials have said they expect to include "mask breaks" throughout the day, especially for special-needs students. Schools also must provide masks for students who do not have one.

DeAnna Strethers' youngest daughter attends high school in State Center, Iowa. She said she understands parents who want to make their own decisions.

"I'm not a big government type of person. I do not like my government telling me that you have to do this or can't do that," she said. "But personally, I think masks are smart."

Scott McFetridge reported on this story for the Associated Press. Pete Musto adapted it for VOA Learning English. Bryan Lynn was the editor.

district(s) – n. an area established by a government for official government business

mask(s) – n. a covering for your face or for part of your face

perspective(s) – n. a way of thinking about and understanding something (such as a particular issue or life in general

at the wheel – idm. in control

recommendation – n. a suggestion about what should be done

exception(s) – n. a case where a rule does not come into effect

monitor – v. to watch, observe, listen to, or check something for a special purpose over a period of time