Update Required To play the media you will need to either update your browser to a recent version or update your Flash plugin.
By Hai Do
08 July 2020


Harvard University and the Massachusetts Institute of Technology (MIT) took legal action Wednesday against the United States government. The schools are seeking to overturn the Trump administration's new rule on international student visas.

Under the rule, international students must take at least some of their college classes in person, transfer to U.S-based schools with in-person classes or leave the country. They will have to leave even if a health emergency forces their classes online later in the school year. 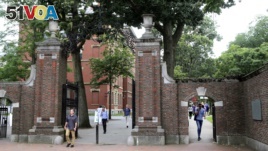 FILE - In this Aug. 13, 2019, file photo, pedestrians walk through the gates of Harvard Yard at Harvard University in Cambridge, Mass. Harvard and the Massachusetts Institute of Technology filed a federal lawsuit challenging the new international visa rule.

The government will reject visa requests from international students at colleges or universities that only offer classes online.

Immigration and Customs Enforcement (ICE), the federal law enforcement agency, announced the rule on Monday. The same day, many colleges, including Harvard, said all their classes later this year would be online.

MIT joined Harvard to file the legal challenge Wednesday morning in Boston. They asked a federal court to bar ICE from enforcing the new rule. They called for the return of the March 13, 2020 "exemption," which permitted international students to attend classes online while retaining their visa during the health emergency.

In a statement, Harvard University President Lawrence Bacow wrote, "The order came down without notice —its cruelty surpassed only by its recklessness." He said the new rule was designed to pressure colleges to hold classes in person, "without regard to concerns for the health and safety of students ..., and others."

The rule, Bacow added, "comes at a time when the United States has been setting daily records for the number of new infections, with more than 300,000 new cases reported since July 1."

At a White House event on Tuesday, President Donald Trump denounced plans from Harvard and other colleges to hold classes online. "They ought to be ashamed of themselves," he said. "That's called the easy way out."

Lewis Picard is a second-year doctoral student in experimental physics at Harvard University. The Australian told Reuters that having to leave "would completely put a roadblock in my research." He added, "There's essentially no way that the work I am doing can be done remotely. We've already had this big pause on it with the pandemic, and we've just been able to start going back to lab."

Aparna Gopalan comes from India. The fourth-year anthropology doctoral student at Harvard said telling students to attend other universities for in-person classes was not realistic. "You can't transfer in July. That's not what happens," she said.

Benjamin Bing, from China, was planning to study computer science at Carnegie Mellon University in Pittsburgh. He said he no longer feels welcome in the United States and is looking at the possibility of finishing his study in Europe.

"I feel like it's kicking out everyone," he said, of the United States. "We actually paid tuition to study here and we did not do anything wrong."

Hai Do wrote this story for Learning English with additional reporting from Reuters. George Grow was the editor.

transfer - v. to move from one school (or place) to another

file - v. to give a legal document so that it can be considered in court

retain - v. to continue to have

surpass - v. to be greater than

recklessness - n. not showing concern about your own action

remotely - adv. from a distance

pandemic - n. an occurrence in which a disease spreads very quickly and affects large number of people around the world